The basic stuff of the sports section is in lockdown. The leagues and schools have stopped the play of game until it’s safe to come out again.

So what are those prodigiously talented and productive journalists who cover sports to do?

I began to ask myself that question after reading a fascinating email that someone forwarded from a listserv. The author, a Seattle architect named George Ostrow, gave me permission to reprint it:

A quarter or more of US newspaper pages and news broadcast minutes is devoted to sports coverage every day. The abrupt cancellation of professional and college sports over coronavirus concerns leaves a journalism vacuum. Player and fan reactions to the cancellations can fill a few days. But then what do you do when your subject matter disappears?

My earnest suggestion is to cover the many other competitions that Americans struggle with in obscurity. The homeless camp that survives the winter. The poor family who manages to put food on the table. The pastor who counsels addicts. The nonprofit that is turning life around for victims of domestic violence.

These stories and more are real contests that our fellow citizens engage in daily. They matter more than millionaires chasing balls. News readers and viewers could follow their successes and near misses just as they would those of their favorite quarterback. Cities could root for their local governments to build more housing than their rival city.

We would all become better informed about the condition of our fellow humans, which would surely lead to greater empathy and measurable improvement in their condition. Sports journalists have been handed not a pink slip, but a unique opportunity to pivot their focus.

It’s a wonderful, idealistic proposal, and I love the idea of filling a sudden emptiness with an experiment in empathy.

But for another view, I turned to Washington Post sports columnist Sally Jenkins. And she offered up a wonderful — and way more realistic — proposal: Stick to sports, just open your mind a bit. She wrote:

What a great question, and suggestion. It arose after 9-11, too. And in New Orleans after Katrina, and in Houston after Hurricane Harvey, but those events were of shorter duration.

The question of what should sportswriters and editors cover is, by extension, the question of, what is the role of sports and athletes in wartime or times of deep national disruption and trouble?

The suggestion that we just abandon them altogether and write about a different kind of competition is well taken, but it also ignores basic human behavior. Humans play. Try and stop them. They play even in the midst of the most awful circumstances. Nelson Mandela writes about prisoners on Robben Island playing soccer.

Why is that? Is it utterly frivolous? Escapism? I don’t think so.

My friend Anna Deavere Smith, the playwright and actress, went to Rwanda, and even there people played. She visited a children’s AIDS hospital and even there, desperately sick kids played, and momentarily seemed alive again. She told me, “Your question about games is the same one I ask about art — knowing full well that artists, like your games’ players, use an awful lot of discipline to capture the hearts and minds of their audiences. They have the potential to use that ‘capture’ for a lot more than mere dazzlement.”

Sports is a pervasive life force. Try and kill it. You can’t. Not by a gun or a bomb or a disease. Anna says, ‘Games are where we should be, rather than at the bank or in war zones.”…

What’s interesting about his suggestion is that bad times are when sports have grown the most in this country in the first place — the Oklahoma and Nebraska college football programs became popular in part because folks in the depression and dust bowl era needed something to root for. They were the focus of intense regional pride and interest for people who wanted something to feel good about.

Same with the NFL — the early franchises represented mill town pride, and people sort of fancied that they were an outgrowth of local character and toughness.

In wartime, which is what this time may be, sports has partly gone on hiatus as it should. But vestiges of it hang around. Prize fighting continued during WWII, even as boxers like Joe Louis and Billy Conn went overseas in uniform along with baseballers. Horse racing was of course popular.

So I think we sports writers and editors need to continue to write about athletes because they are a life force. And we need their vitality.

We also need to look beyond the most narrow traditional games. New ones will arise. We will find new interesting things to do, ways to self express through games or through non-work.

Winter surfing intrigues me at the moment. It’s a sport of terror and hardship and adrenaline.

Certain things are going to speak to audience, strike chords in them. It’s our job to find those things, precisely because they reflect all the struggles of the men and women who struggle to put food on the table and march out into the word in the workbooks or neckties.

I don’t see that we’ve gotten a pink slip at all. A shift in focus, certainly. But the subject is timeless.

One obvious answer was that underworked sports journalists could temporarily join the regular news coverage, much of which is currently focused on the effects of the coronavirus.

Absorb them into the news staff. Most sports writers are good reporters and already deal with a variety of financial and social issues as part of their beats. They're used to working on tight deadlines.

That’s already happening in at least a couple newsrooms that I’ve heard of. And local newsrooms are terribly understaffed these days.

Local news! The local papers have been decimated, just as people will want to know what is going on in their community. Sports people will know the all local players.

And since so many news reporters cover politics like it’s a big game….

Given how the media covers political campaigns, nowadays, I’d think they could slide right in for some typical horse race coverage.

Lots to report on the business side of sports. Doesn’t have to be hard investigative stuff; I’ve learned a lot on how the NFL actually works in the past week just because the CBA vote/free agency/draft is the only thing going. Just drill down & give more context where possible.

And there were some other interesting ideas, too:

Have long-form interviews via YouTube. So what if the production is bad. Specialty long forms too
e.g. Talk to retired referees to get their take on players, games, and their jobs as refs. Highlight behind the scenes peeps: 2nd tier trainers.

Do human interest stories on the sports related support industries. Talk to Aramark, Tshirt companies, Agents, venue managers, trainers, etc. In depth on the people behind the people.

There should be online tournaments in sports video games, featuring players from real teams, controlling those teams in the video game world, with the sports reporters and commentators covering it like it was real life.

The LA Times just made this announcement:

The @latimes will continue to have a sports section but the back page is now dedicated to kids. They’ll be able to ask our science and health reporters questions about what’s happening, upload videos and draw and cut out pictures that we will share. pic.twitter.com/7FS0MBOJVx

The Washington Post and New York Times are folding their daily sports sections into the back of their Style sections.

What do I think? Well, I certainly don’t think we should shut down all sports coverage. And I do think that, as long as there are no games, sports journalists should pitch in if there are urgent news stories that would otherwise go uncovered.

But I’m also intrigued by the possibility that sports journalists could do something special during this period of crisis. The best sports journalists excel at connecting with readers and viewers; they write vividly; they root for the underdog; they demand accountability for failure. And right now, we’re all in a race against time. 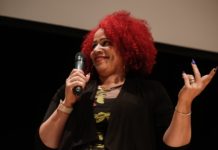