I am happy to report that some of the leaders of our top newsrooms seem to have finally realized, at least for the moment, that Donald Trump presents a grave danger to our democracy.

It took arguably the most outrageously anti-democratic statement by an American president ever – and nearly a whole news cycle, during which many of us gnashed our teeth – but some major news organizations are finally responding with the strong headlines and alarming rhetoric that the moment requires.

I was particularly impressed with Lester Holt, who led the NBC Nightly News with this unstinting language:

Tonight: President Trump’s unprecedented attack on America’s election; the president again today casting doubt on the legitimacy of the upcoming vote after refusing to commit to a peaceful transfer of power if he loses to Joe Biden.

And he led off one of several related news segments like this:

In a year and a season where shock is hardly in short supply, what may be among the most stunning words spoken by an American president are loudly resonating tonight: President Trump’s refusal to commit to a peaceful transfer of power should he lose the election the president dangling doubt over one of the most powerful rights of American democracy.

NBC White House correspondent Peter Alexander proceeded to report that “with the election just 40 days away, President Trump, trailing Joe Biden in most polls, is bulldozing one of the fundamental principles of American democracy, refusing to commit to the peaceful transfer of power.”

Holt also introduced a report about early voters in Michigan, calling “the president’s comments in the transfer of power very much in the minds of voters.”

This is huge, because the network news is one of the last, best vectors when it comes to getting the truth to low-information voters.

Sadly, the other broadcast networks were considerably more muted.

Norah O’Donnell, on the CBS Evening News, led off with the much less strident: “Down in battleground state polls, tonight President Trump says he’s not sure this year’s election will be honest, and he’s falsely claiming tonight that mail-in voting is a whole big scam.”

The boldest Karl got was when, after airing Press Secretary Kayleigh McEnany’s assertion that “the president will accept the results of a free and fair election,” he noted that “it’s not clear that assurance means anything; the president has gone from warning about possible voter fraud to effectively declaring – without evidence – the election is already rigged.”

In another significant shift, our two major national newspapers finally roused themselves from their slumber. After burying their initial stories on A15 and A4, here’s what their front pages looked like on Friday: 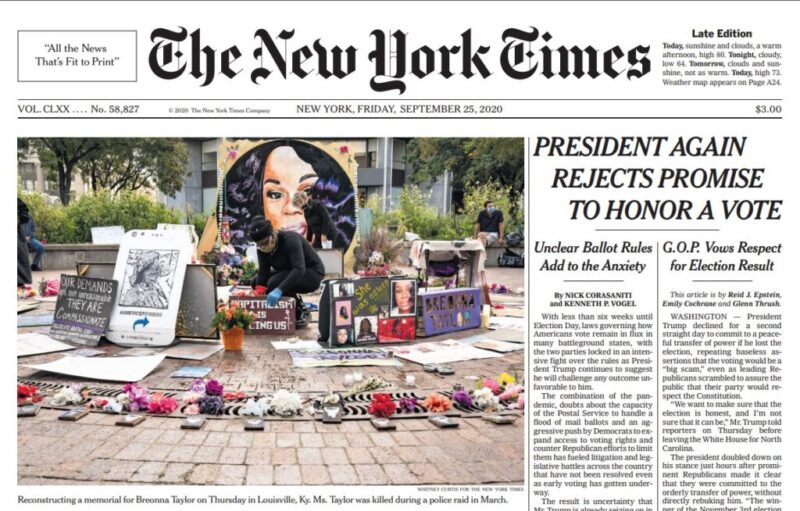 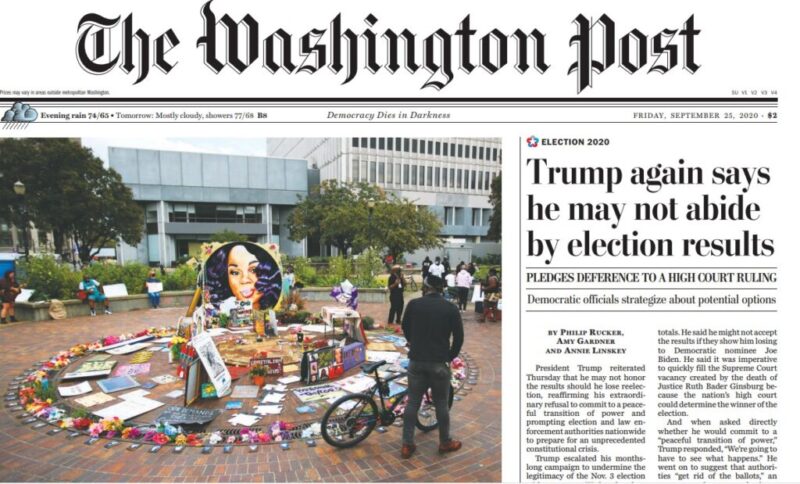 The Post in particular redeemed itself with a no-holds-barred opening salvo. Philip Rucker, Amy Gardner and Annie Linskey wrote:

President Trump reiterated Thursday that he may not honor the results should he lose reelection, reaffirming his extraordinary refusal to commit to a peaceful transition of power and prompting election and law enforcement authorities nationwide to prepare for an unprecedented constitutional crisis.

Trump escalated his months-long campaign to undermine the legitimacy of the Nov. 3 election with comments Wednesday that, taken together and at face value, pose his most substantial threat yet to the nation’s history of free and fair elections.

I appreciate how they made it clear this was not an isolated incident:

In recent days, the president cast doubt on the integrity of vote totals. He said he might not accept the results if they show him losing to Democratic nominee Joe Biden. He said it was imperative to quickly fill the Supreme Court vacancy created by the death of Justice Ruth Bader Ginsburg because the nation’s high court could determine the winner of the election.

And they included appropriately alarming quotes — not from “critics” but from experts:

“For the first time in my life, and maybe for the first time since the Civil War, the fate of constitutional democracy in the United States is on the line, and it’s on the line because the president has put it there,” said William A. Galston, chair of the Brookings Institution’s Governance Studies Program. “It is a clear and present danger.”

President Trump declined for a second straight day to commit to a peaceful transfer of power if he lost the election, repeating baseless assertions that the voting would be a “big scam,” even as leading Republicans scrambled to assure the public that their party would respect the Constitution.

But, sadly, they quickly attributed the essential context to “Democrats”:

Democrats were far less restrained, comparing Mr. Trump’s comments to those of an authoritarian leader and warning Americans to take his stance seriously.

At least they quoted experts as well as “critics”:

Chris Edelson, an American University professor who has studied the expansion of presidential power during national emergencies, said Mr. Trump’s comments represented a unique threat to a central pillar of democracy. “It’s impossible to underscore how absolutely extraordinary this situation is — there are really no precedents in our country,” he said. “This is a president who has threatened to jail his political opponents. Now he is suggesting he would not respect the results of an election. These are serious warning signs.”

Douglas Brinkley, the presidential historian, said, “This may be the most damaging thing he has ever done to American democracy.” 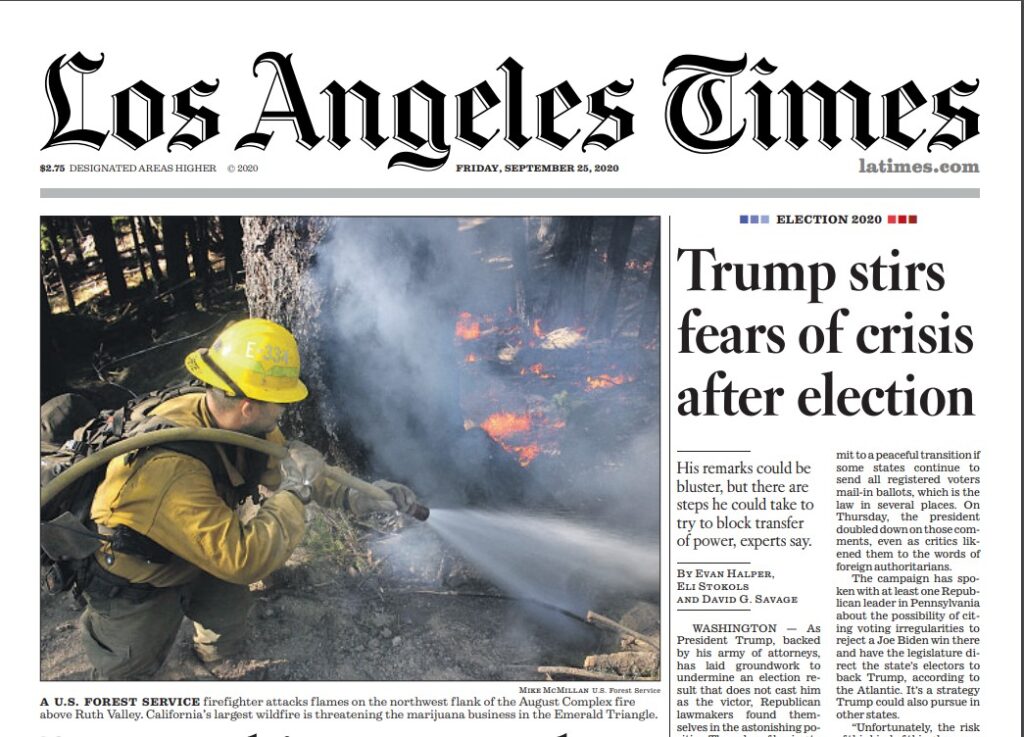 As President Trump, backed by his army of attorneys, has laid groundwork to undermine an election result that does not cast him as victor, Republican lawmakers found themselves in the astonishing position Thursday of having to reassure Americans there would be a peaceful transition of power should he lose.

Already, the campaign has challenged election plans in a number of states and fought aggressively to curtail voter turnout. It has fought to reduce eligibility to vote by mail, purge voters from the rolls, tighten voter ID requirements, reduce or ban the use of drop boxes, and discard mail-in ballots that have technical flaws or arrive after election day.

They also noted Trump’s heavy spending on “in-house lawyers as well as attorneys from law firm Jones Day in Washington and the Los Angeles firm of Charles Harder, which specializes in media defamation suits.”

The Associated Press, which is so hit-or-miss on holding Trump accountable, mostly failed to capture the gravity of the situation, focusing instead on the (admittedly dramatic) reaction.

President Donald Trump’s refusal to commit to a peaceful transfer of power if he loses drew swift blowback Thursday from both parties in Congress, and lawmakers turned to unprecedented steps to ensure he can’t ignore the vote of the people. Amid the uproar, Trump said anew he’s not sure the election will be “honest.”

But the AP story – especially with a blunt headline – still packed some punch by the time it made it to many American doorsteps. (See below.)

How it played across the USA

It wasn’t just the major news organizations that finally took notice of the danger. Many regional and local ones did, too. Consider the front pages of the Miami Herald: 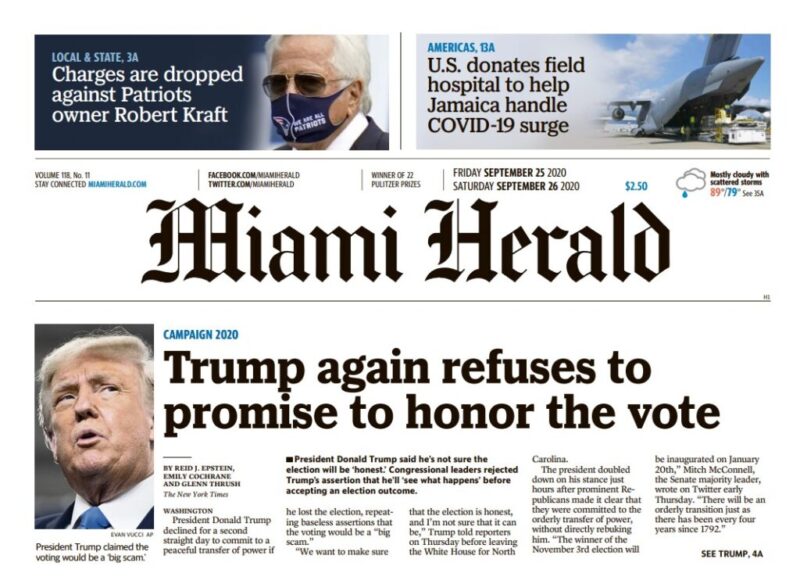 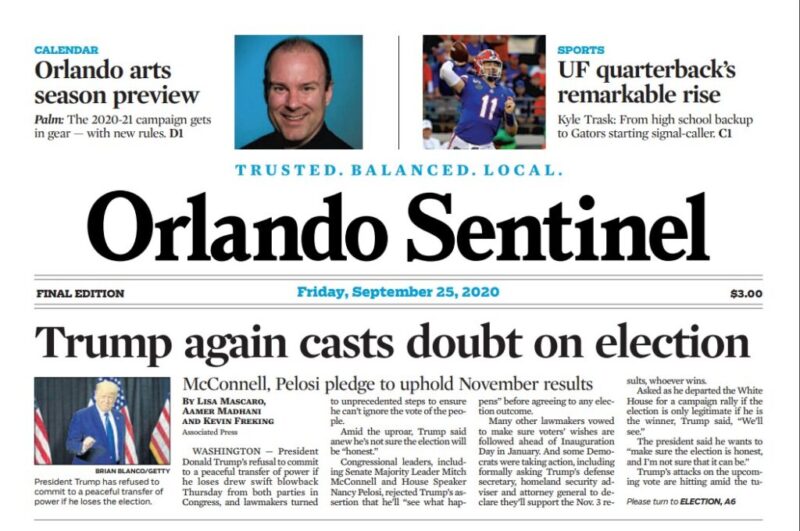 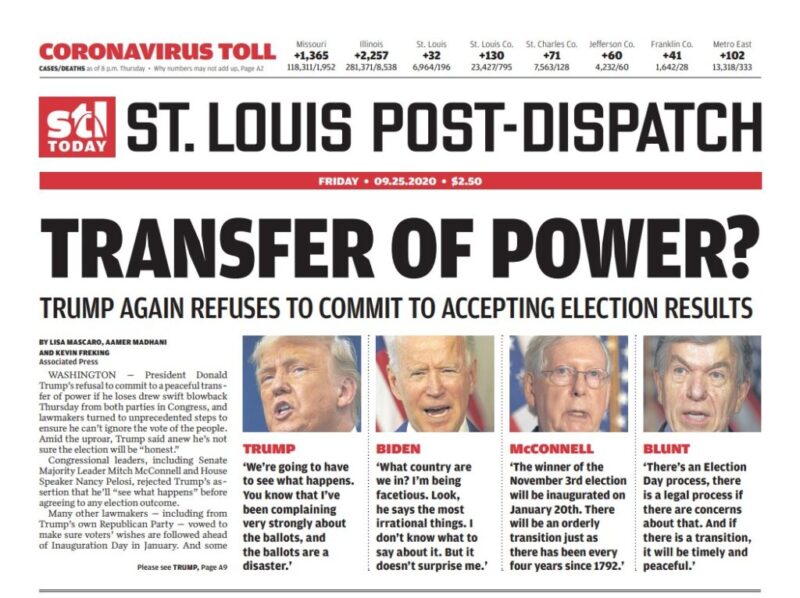 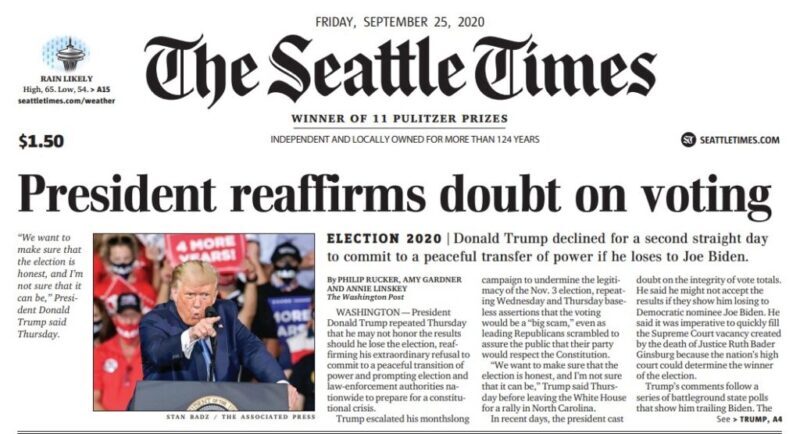 And the particularly blunt Minneapolis Star-Tribune:

The Hartford Courant, in Connecticut, supplemented a wire story with its own reporting by Michael Hamad that the state’s top elected Republican was critical of Trump’s comments — but that Connecticut GOP party leader J.R. Romano instead responded with nonsense about how “The Courant ignores comments like ‘You ain’t Black’ from Joe Biden.’” 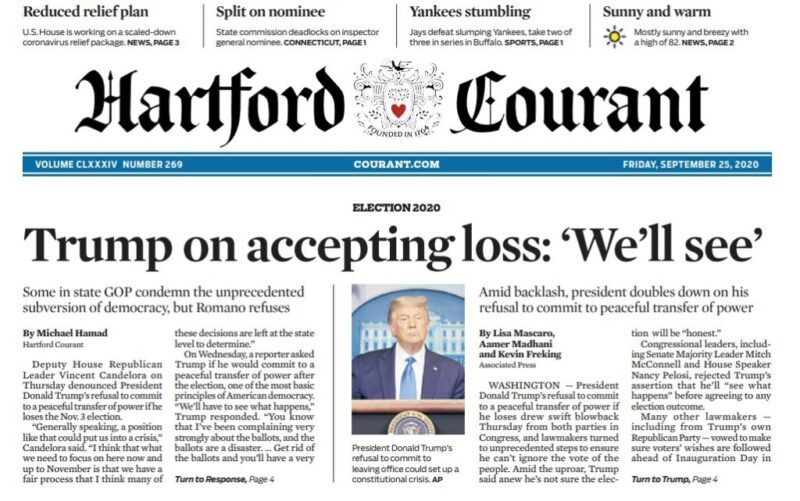 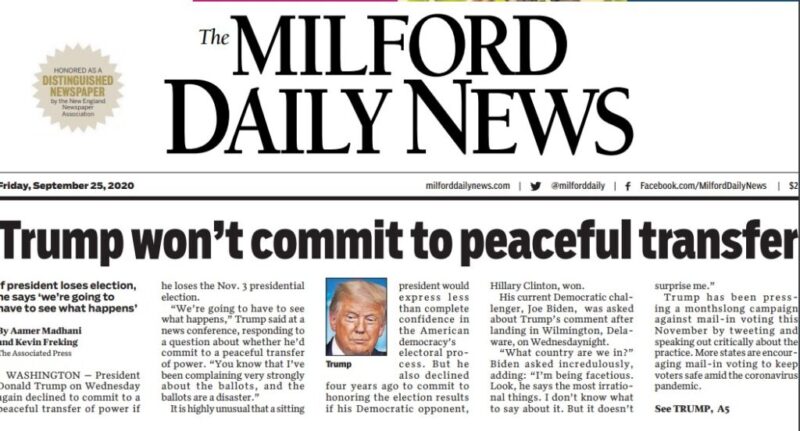 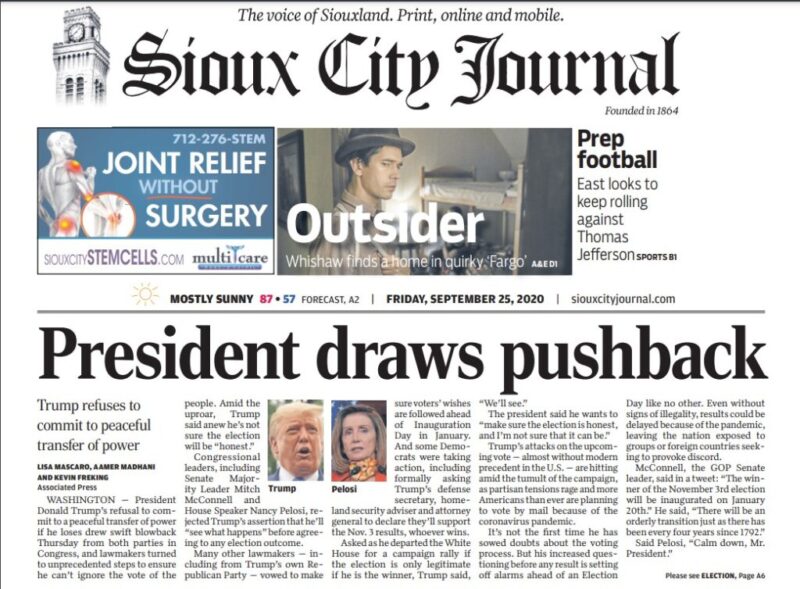 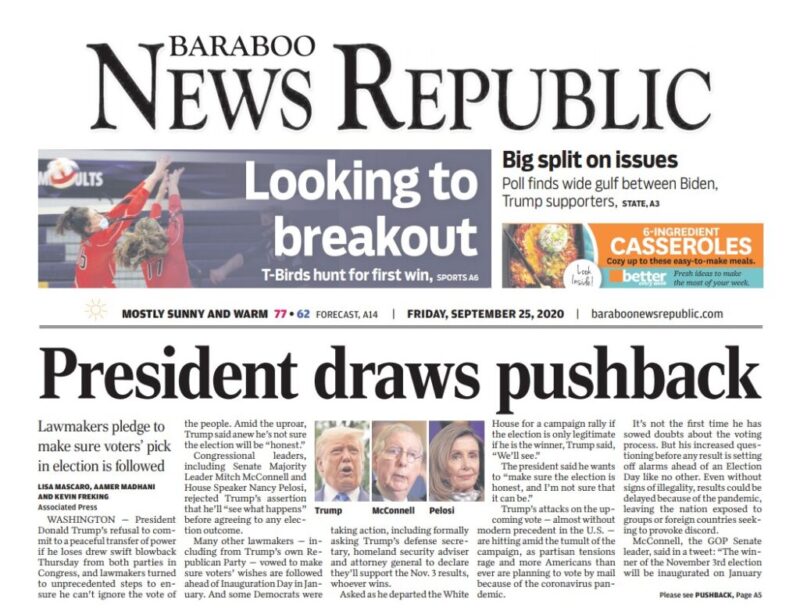 Before you get too excited

None of this means that our top news editors have actually gone into panic mode – as they should.

Indeed, the primary focus of these stories – Trump’s refusal to make an easy, specific promise – leaves open the distinct possibility that he will, at some point, dutifully say the necessary words and news editors will decide the issue has been resolved. (As if he doesn’t lie all the time.)

But what matters about the words — the reason they deserve so much attention — is not just that he said them, it’s what he revealed, and all the evidence that supports it. As media critic Eric Boehlert wrote in his Press Run newsletter on Friday: “Trump is trying to steal an election, and the press should say so, every day until Election Day.”

The other possible downside is that the coverage of Trump’s attempts to steal the election drown out – rather than supplement – the coverage of the ongoing national crisis that remains the single most important news story in this country and in the election.

On that front, even as the Washington Post was distinguishing itself with its coverage of Trump’s threat to democracy on Thursday, it was embarrassing itself with this absolutely horrible take by Josh Dawsey and Michael Scherer headlined “As Trump exudes pandemic optimism, Democrats still see worry — and an advantage.”

The president is betting his political future on convincing voters that a recent dip in coronavirus cases, hospitalizations and deaths signals a coming end to the national nightmare — and is a reason to reassess his handling of the pandemic and vote for him.

They called that “a risky strategy” – on political terms alone. And they included astonishingly normalizing observations, such as that “several campaign and White House officials say Trump has not helped himself as much as he might have.” (See my July 17 post, “Washington Post campaign reporters describe Trump’s epic failings as ‘self-sabotage’“.)

The fact is that Trump’s “optimism” is hardly sincere – it’s contrived lunacy — and it’s killing scores of Americans every day.

The Institute for Health Metrics and Evaluation at the University of Washington, for example, forecasts a dramatically increasing death rate in the U.S. over the next several months — which could be significantly slowed by precisely the kind of mask use that an “optimistic” Trump discourages.

Yes, Trump’s lies about the pandemic – just like his refusal to pledge to a peaceful transition – are relevant to the campaign. But they are first and foremost gravely dangerous to the republic and the people who live in it.

Lester Holt, the Washington Post, and the others finally seem to have grasped this. Let’s hope they don’t let go.