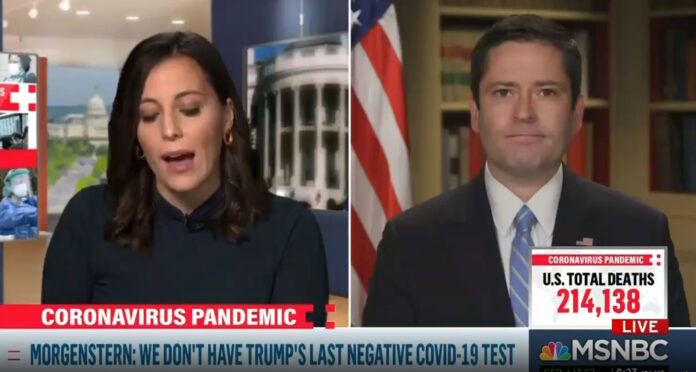 Donald Trump recklessly and corruptly violated agreed-upon presidential debate commission rules by not getting tested for COVID-19 shortly before the Sept. 29 debate in Cleveland.

That’s the obvious conclusion from the White House’s relentless stonewalling about when he last tested negative. And it’s time the news media said so.

I should be clear: Journalists should keep digging. In fact, it would be great if our elite White House reporters went back to the “sources” they have so assiduously fluffed and granted anonymity to over the last three-plus years and demanded a little payback. Like: “Tell us the truth — now — while it still matters.”

But it’s entirely reasonable for our top news organizations to report at this point that the White House’s continued refusal to provide simple, basic information leads to the inescapable conclusion that Trump had not been tested recently and that -– in the absence of any evidence to the contrary — he certainly wasn’t tested before the debate.

That’s actually the most innocuous possibility.

There are considerably more heinous possibilities, including that he stopped getting tested weeks or months ago simply out of spite, or that he actually had symptoms before the debate, or that he tested positive on a rapid-response test long before the official announcement but the White House didn’t consider that definitive.

But his decision to attend the Cleveland debate without being tested, which is now incontrovertible, is heinous enough.

It speaks volumes about Trump’s level of personal responsibility.

Does he feel any at all? What he did was dangerous to everyone around him. He could have killed Joe Biden. This is not the sort of thing a normal, moral person would do — not to mention someone in a leadership role.

It also speaks to the willingness of Trump’s White House staff to mislead and lie. “The one thing they have been saying repeatedly throughout the last several weeks and months of this pandemic is that he is tested very regularly,” Reuters reporter Jeff Mason told Democracy Now on Monday. “I think many people assume that that would mean that he is tested on a daily basis, which would have included that Tuesday of that debate.”

The White House also evidently lied to the debate commission and the Cleveland Clinic, which was supervising safety measures. As Benjamin Siegel reported for ABC News, “both campaigns certified to debate organizers that the candidates and everyone who traveled with them to Cleveland tested negative within 72 hours of the debate.”

Debate organizers required the Biden and Trump campaigns’ medical teams to test the candidates and their traveling parties within 72 hours of last Tuesday’s debate, and “certify” to the Cleveland Clinic that each person traveling tested negative within that window.

“Each campaign complied with this requirement,” the clinic, which partnered with the Commission on Presidential Debates to stage the debate, said in a statement.

Specifically, each campaign provided a list of names and the results of their test, clinic spokesperson Angie Kiska told ABC News.

White House spokesperson Judd Deere also lied to reporters on Oct. 1. BuzzFeed reported that “Deere said Friday that everyone who traveled on Air Force One to Tuesday’s debate was tested that day, but did not provide further details about the testing and did not answer a question about how that was communicated to the clinic.”

As debate moderator Chris Wallace explained after Trump’s announcement that he was infected, everyone at the debate other than the candidates and their entourages was physically tested by the Cleveland Clinic. The candidates were on the “honor system.”

Even as Trump was potentially spreading the virus onstage, he mocked Biden for his mask wearing — and most of Trump’s contingent in the audience, including his adult children and senior staff, violated commission rules by taking off their masks.

Given all the other outrageous things Trump has done in the 10 days since the debate — his joyride outside Walter Reed with captive Secret Service agents, his gasping Mussolini-esque salute from the White House balcony, his preposterous claim that there is a cure, his abrupt reversals on a new stimulus bill and his mad string of tweets, just for starters — is the fact that Trump went to the debate untested really that big a deal?

I asked my Twitter followers and they seemed to think so.

May not be the most outrageous, but it’s the most representative of the other outrages.

Trump's MO never changes…ignore the rules or laws that are keeping Trump from something he wants. When people start to object, break more rules and laws while they're still dealing with the first one/

As I argued on Monday, it’s worth paying particular attention to the questions the White House is refusing to answer the hardest. The No. 1 question they are refusing to answer, by far, is when the president last tested negative.

Maybe they think this one could really hurt.

Maybe they’ve done focus groups, and found that it hurts him with undecideds, or even with his base.

Maybe they realize how indefensible his conduct was, and how potent a symbol it is of his overall failure to contain the virus.