Sometimes, the political reporters at the New York Times really tip their hands.

Today is such a day.

But the overwrought and smarmy lead Times story by Jonathan Weisman and Emily Cochrane described instead a sky-is-falling scenario for Democrats undermined by a “liberal revolt” that amounted to a “humiliating blow” for Biden.

Even more than the White House, Congress can be a Rorschach test for political reporters, resulting in a variety of interpretations that speak volumes about their own emotional functioning.

What the Times story revealed was the reporters’ triumphalist delight in anything that can be characterized as a failure by progressives.

Calling a small, perhaps entirely forgettable chapter in legislative sausage-making a “humiliating blow” to Biden is an entirely subjective judgement, which assumes both that the action in question is inherently shameful and that the person in question ought to be ashamed.

(By contrast, when Donald Trump was impeached – the first time — the Times didn’t call it a humiliating blow, they called it a reflection of “the deep polarization gripping American politics in the Trump era”. Heck, I’m not sure Times reporters ever described Trump as “humiliated” about anything, ever.)

I’m a huge believer in knowledgeable reporters adding context and perspective to their news stories. But this was unfounded, unsupported, hasty hostility.

Talking Points Memo editor Josh Marshall described the article as “so comically wrong in its basic understanding of events that I really do have to wonder what’s wrong with the publication’s DC bureau. Something there and really in the whole operation right up to the top is seriously wrong for this piece to have been published.”

That the story’s lead byline belonged to Jonathan Weisman will come as no surprise to people who have followed his career. He consistently brings a sense of smug superiority to his writing, essentially trolling progressives.

Sometimes he even does it on Twitter. In fact, earlier in the day on Tuesday, he inflamed progressive Twitter by urging Democrats to take inscrutable holdout Sen. Joe Manchin “at his word,” accept that the “expansive social policy and climate bill once envisioned isn’t going to happen,” and vote for a small-bore economic bill “with some climate to assuage progressives.”

This is the New York Times's version of "objectivity": the centrist white male perspective enshrined as inherently trustworthy, changes to the status quo inherently illogical, policy doesn't matter, it's all a game. https://t.co/ak6iTEzsHW

“This is written as if climate change is some pet progressive issue and billions of lives don’t hang in the balance,” researcher and writer David Atkins tweeted.

To give you an idea of how unrepentantly self-righteous Weisman is, consider that he was demoted a little over two years ago from his perch as deputy Washington editor, because, the Times explained, “he repeatedly posted messages on social media about race and politics that showed what the paper called ‘serious lapses in judgment.’”

One infamous Weisman tweet that I wrote about scoffed at the notion that heavily-minority urban areas in the Midwest are part of the Midwest.

Weisman was told to stop his activity on social media at the time. He acknowledged that he had “embarrassed” the Times.

So presumably Weisman thought that telling progressives to back off in a tweet was not just good advice, but the kind of advice that would not embarrass the Times — in other words, that it perfectly reflected the views of the Times Washington bureau.

The other byline, Emily Cochrane, I know much less about, other than she has recently taken to referring to the larger budget bill that Biden and almost all Democrats support as a “social safety net bill,” which is reductive and dismissive, in addition to having a bit of “social welfare state” energy. The bill proposes to spend $350 billion a year over 10 years on such things as universal pre-K, free community college tuition, extended child tax credit, Medicare expansion, paid leave, and massive investments in reducing carbon emissions, pollution and forest fires. Cochrane has been covering Congress for the Times for three years.

The Times wasn’t alone in being histrionic about Tuesday’s events. The coverage strongly supports the view — expressed by Andrew Taylor, the former AP congressional reporter I interviewed earlier this week — that the congressional press corps overhypes incremental developments for clicks.

As expected, the postponement of the vote is being treated as a "crushing blow" and a "huge setback" to Biden's agenda. Utterly ludicrous. Such things happen all the time with complex legislation. This kind of coverage, which masquerades as savvy, is the opposite of savvy. 1/

The coverage in general also reflected how normal and un-newsworthy Washington reporters consider extreme GOP obstruction. (I don’t think the Times even mentioned that every single Republican senator voted on Tuesday to curtail assistance to Afghan refugees.)

And it’s another example of how they try to frame every dispute among Democrats as a civil war between leftists and “moderates” or “centrists” — when in this case it’s nearly the entire party versus a few holdouts representing nebulous corporate interests, with a hugely popular, potentially transformative economic package at stake.

All of this media triumphalism over what could be a minor setback comes, of course, as Congress on Tuesday passed a continuing resolution keeping the government open – just as every level-headed observer knew they would, eventually.

The seamless, no-looking-back shift from “SHUTDOWN LOOMS” to “humiliating setback for Biden” should be evidence that you can’t trust reporters at the nation’s premier media outlets to tell you what you actually need to know about Congress. And especially not the New York Times. 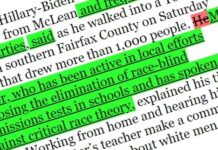