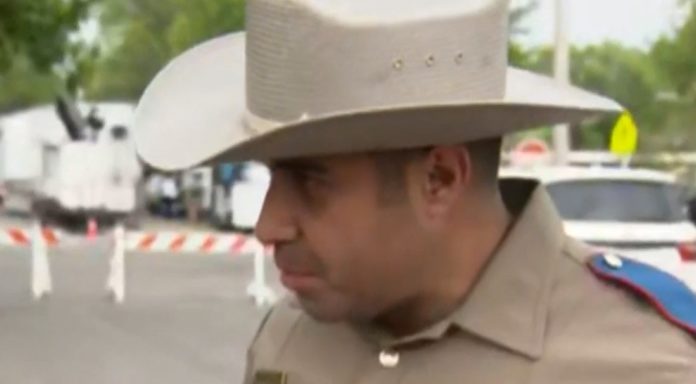 He didn’t mean that all governments lie all the time. He meant they all lie some of the time.

And he reserved his greatest scorn not for lying officials, but for the credulous journalists who reported what those officials told them, instead of digging for the truth.

As a non-official narrative begins to gel about the police response to the mass murder of little boys and girls at an elementary school in rural Texas on Tuesday, all of us – journalists and the public alike – are hopefully seeing what a mistake it can be to think the police are telling us the truth.

What we’re all slowly discovering, through social media and interviews with anyone other than the police, is that officials appear to have wildly misled journalists and the public, describing a quick and heroic response by law enforcement. Instead, it appears police considered it more urgent to fend off desperate parents than to stop the killing.

Contrast the video of Lt. Chris Olivarez, a spokesperson for the Texas Department of Public Safety, repeatedly praising the “brave men and women of law enforcement” who he said “saved more lives” with the absolutely agonizing video of parents trying to rescue their children and being fought by police themselves.

News organizations are belatedly “raising questions” about the police response — although even in those same stories, they continue to report arguably false information related to them by the exact same officials who they now know lied to them, and calling it “breaking news”.

The obvious lesson that needs to be internalized here is that just like governments, police lie when the truth makes them look bad. And smart journalists should act accordingly.

“Police should be treated by journalists the way they treat Donald Trump or Vladimir Putin,” Alec Karakatsanis told me. “It should be noted that everything they say is self-interested and they have long and documented histories of lying. You have to alert your readers that there are reasons to be skeptical about what they’re saying.”

I called Karakatsanis because he has recently emerged as one of the most urgent and important voices of media criticism on Twitter, publishing absolutely blistering, must-read threads about what is effectively complicity between news organizations and law enforcement officials, who together create false panics about violent crime and glorify  police.

The founder and executive director of Civil Rights Corps, which litigates civil rights cases across the country, Karakatsanis said he wasn’t surprised to hear the original police story unraveling on closer inspection.

In face, he said, “It’s never surprising when they’re completely incompetent at basic tasks that people associated with safety.”

“The police are a very politically motivated and interested group,” he said. “They have a certain narrative of what they do and why, which is designed to get more money and power.”

The result: “What you see is police spending a lot of time trying to lie about and cover up their own incompetence  or misconduct.”

Media criticism is an accidental side gig for Karakatsanis. “In all of our civil rights cases across the country, I began to get so dispirited by the lack of rigor in the media coverage so I just started posting about it,” he explained.

Although he doesn’t limit his criticism to the New York Times, his threads about that paper’s failings are among the most viral. He has, for instance, written about the Times’s astonishingly shoddy and evidence-free speculation about a link between the “pullback by police” and higher crime, from an ethically compromised writer:

Thread. What is happening right now at the New York Times is important and dangerous. I've tried to document it thoroughly below.

He’s chronicled pro-police hyperbole about the murder rate in the Times:

THREAD: Yesterday, the New York Times published a headline it knew was false. The implications of this are dangerous for everyone who cares about an informed public. Here’s what happened:

He exposed blatant “copaganda” about the mass subway shooting in April (yes, the one where the bodega guy caught the suspect):

THREAD. Today the New York Times responded to a mass subway shooting with a relentless string of copaganda. Let’s look closely at how the NYT used a crisis to boost police talking points and lies in some creative ways:

And he’s called attention to some exceedingly bad analysis by German Lopez:

THREAD: Today the New York Times published what might be its worst police copaganda article yet. It's by the same newly hired reporter who I've written about before. I try my best below to explain what happened and why it is so important.

It’s all part of larger and quite persuasive critique of how the police use journalists to focus public interest on a very narrow range of interpersonal crimes while ignoring much greater crimes and threats to safety such as wage theft and climate change.

They also “try to convince us that there are surges and waves and upticks in police-reported crimes because they want to create an environment of fear and panic — because it’s in those times of fear and panic that people reflexively seek order and control,” Karakatsanis said. And where journalists really carry the police’s water is when they suggest that more police (and prosecutions and prisons) reduces crime.

The massive Black Lives Matters protests of 2020 led some journalists — especially those who were maced, beaten with batons, tear-gassed, and arrested — to reevaluate the profession’s reflexive deference to police, but to not much effect. Too many reporters still use the passive voice to describe police actions — although they are increasingly likely to get called out for it.

The crumbling of the police narrative in Uvalde is unique because it is so visceral  and is happening while people are still paying attention, which is rarely the case.

“Let’s see what emerges, ” Karakatsanis said, “and use it maybe as a way of helping journalists understand what kind of institution we’re dealing with here.”