An extremist right-wing majority of the Supreme Court is preparing to repeal abortion rights, dealing an enormous blow to women’s autonomy, clearing the way for 26 state governments to dictate the decisions of pregnant women, and presaging an assault on other hard-fought liberties that have made the country more tolerant and humane.

But the country’s major news organizations instead are focused on process. On the leak of the draft opinion itself. On how this could affect the midterm elections. On partisan strategy. On “politicization” of the court. On senators who tried to have it both ways. On “both sides” getting emotional.

Even from a purely journalistic perspective, that is hideously poor news judgement. An enormous, course-altering social change is now officially on the brink of happening, and you blither about process?

But it’s the lack of humanity in failing to recognize the stakes, the cost, and the momentousness that simply boggles my mind.

How could the most esteemed editors of our leading national publications decide, upon learning that Roe v. Wade is presumably about to be repealed, that the most important second-day story is “Roberts directs investigation into leaked draft”?

How will this ruling affect women? Talk to women who’ve had abortions and ask them what it would have been like for them if becoming pregnant – even by rape or incest – had cost them their autonomy? Explore how Roe v. Wade changed the course of the nation. Track the origins of the anti-abortion movement and examine its real motives. Discuss how radically out of sync with the rest of the legal community and the country the court has become. Tie this into the ongoing authoritarianism of the Republican Party, which threatens our very democracy.

It took until Day Three for a story like this to make it into the top of the Washington Post homepage — by women, about women.

The word “women” didn’t even appear in Peter Baker’s lead New York Times story on Wednesday’s front page until after the jump, six long paragraphs in, and even then it was in a paragraph about how the ruling “would represent a devastating defeat for liberals who sought to guard women’s right to choose the procedure against years of efforts to chip away at the ruling.”

As it happens, there were a lot of stories about the true, profound implications of the loss of reproductive rights, but they weren’t on the front pages, they weren’t done by news reporters. They were in the opinions section, the features sections, and even in the metro sections.

I feel like the years of stolidly refusing to stand up for themselves — despite a deluge of disinformation, attacks on the press, the rise of white nationalism, and the growing threats to democracy — have cost the people writing and editing national news their humanity, their souls. If they didn’t sound the alarm before, why now?

But something very big is happening. Let yourself feel it, people. And crank up the font sizes. 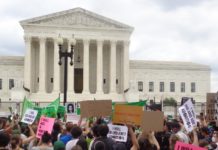 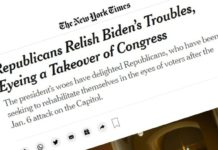