Raising the possibility of Donald Trump invoking emergency powers rather than get impeached or lose reelection, the Brennan Center for Justice on Wednesday challenged Congress to immediately start reviewing statutory provisions that release the president from many legal constraints upon his declaration of a national emergency.

In an article in the Atlantic, the Brennan Center’s Liza Goitein notes that Trump took unprecedented steps to boost Republican turnout in the midterm elections, such as sending active-duty troops to the border in response to an imaginary threat.

Then she asks: “How much further might he go in 2020, when his own name is on the ballot—or sooner than that, if he’s facing impeachment by a House under Democratic control?”

She envisions a not entirely implausible scenario that starts with Trump declaring the threat of war from Iran and closing internet sites belonging to groups he says are subject to Iranian influence. It ends with him sending a text message to every American’s cellphone warning of violence at the polls, deploying troops, and winning reelection.

The Brennan Center, a progressive legal powerhouse based at the New York University Law School, has an accompanying database showing all 136 statutory powers available to presidents in a pinch. And don’t miss Goitein’s marvelously succinct video (see above).

Congress built an “edifice of extraordinary powers” over decades based “on the assumption that the president will act in the country’s best interest when using them,” Goitein writes. But some of them “appear dangerously suited to a leader bent on amassing or retaining power.”

It’s arguably the most terrifying example yet of how Congress has ceded the presidency enormous power during the last several decades. The solution, Goetien explains, is for Congress to impose “strict time limits on presidentially declared states of emergency” and “revise emergency powers to ensure that they don’t threaten Americans’ fundamental rights and freedoms.”

But she acknowledges in the video that the current Congress is unlikely to take the required action. Instead, she encourages “forward-looking committee chairs” to at least launch the process.

So, best-case scenario, that leaves Trump at least two full years with all these powers at his disposal.

I’m actually more concerned about Trump inciting and then overreacting to a terror attack. But more on that some other time.

If Biden wins, political journalists have a lot of catching up to do 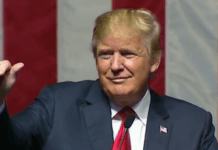