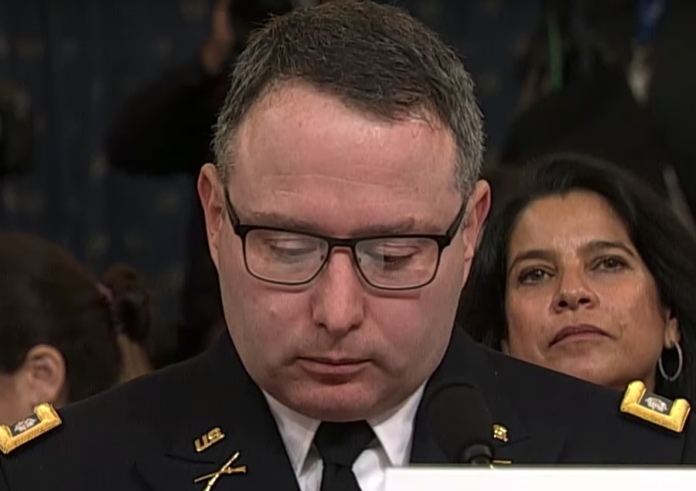 Bothsideism has perhaps never been more inappropriate in the news coverage of a major event than it is right now, as fact witnesses are providing consistent, credible, and compelling evidence of presidential abuse of power, and Republicans are throwing around vile and scurrilous insinuations about patriots, spouting bizarre conspiracy theories, and adopting at last count 22 different and often contradictory defenses of conduct that history will condemn as indefensible.

And yet here is the top of the article the Associated Press sent out to hundreds of members news organizations last night, by Lisa Mascaro and Mary Clare Jalonick:

A career Army officer on Donald Trump’s National Security Council testified Tuesday he was duty-bound to object to the president’s clearly “improper” phone call seeking Ukrainian investigations of U.S. Democrats. Republicans answered him with doubts about his loyalty to the United States.

The lead gave almost equal weight the devastating testimony of decorated veteran Lt. Col. Alexander Vindeman and the GOP’s unfounded and shockingly un-American accusation against him.

And even worse, the article never discussed the genesis of the Republican smear, and never refuted it.

Yes, there was mention in the third paragraph that Vindman is “a 20-year military officer who received a Purple Heart for being wounded in the Iraq War.”

But it wasn’t until much further down in the article that the authors discussed the accusation – and when they did, it was as a back-and-forth between Vindman and the Republicans:

Yet Vindman spent long stretches fielding Republican attacks on his loyalty and his career in public service. The Republicans’ lead counsel asked at one point about an offer he got from a Ukrainian official to become the country’s defense minister.

Vindman called it “comical” and said he swiftly reported it up his chain of command.

“I’m an American,” Vindman said. “And I immediately dismissed these offers.”

Way down in the story, the AP noted that Vindman now finds himself in danger, but didn’t explain the role of vitriolic rhetorical attacks on his person from the president and other Republican officials:

Vindman is being provided security by the U.S. Army and local law enforcement, according to a U.S. official. The official said the Army is prepared to take additional steps, if needed, including moving Vindman and his family to a more secure location on a base.

And while AP stories sometimes get overlooked by the inside-the-Beltway cable-TV punditry, they appear on front pages all over the country and the world. This one, for instance, dominated the front pages of the Chicago Tribune and the Dallas Morning News this morning.

There was something to be said for focusing on the Republican conduct on Monday – because it was so egregious — but only in that context.

Several news organizations called attention to the unprecedented use of the taxpayer-funded White House Twitter account to smear someone currently working at the White House. CNN, for instance, made frequent mention of that.

And CNN’s Daniel Dale pointed out that the White House – and Trump himself – shared this doctored video:

The White House shares this clip…omitting the part where Vindman said he rejected the offer, reported it to his superiors and to counterintelligence, and found it comical. (Ukrainian who made the offer tells the Daily Beast it was "clearly a joke.") https://t.co/eGXNoKqlwl

In the AP’s defense, I didn’t see any really laudable examples of how reporters should have contextualized and refuted the GOP attacks.

The main Washington Post story didn’t mention the Republicans’ attacks on Vindman at all – which is better than mentioning and not refuting them.

But I saw no fewer than three opinion pieces on the Post’s website this morning condemning them: Republicans portrayed Vindman as disloyal. They have no sense of decency.; Republicans’ unmistakable innuendo about Alexander Vindman; and Why the Republican attacks on Alexander Vindman mark a new low.

It was a big deal.

The main New York Time story noted that Republican raised questions about Vindman’s loyalty, and quoted both Vindman and a defender:

“They’ve accused you of espionage and dual loyalties,” said Representative Jim Himes, Democrat of Connecticut. “The three minutes we asked about the offer making you minister of defense — that may have been cloaked in a Brooks Brothers suit, but that was designed exclusively to give the right-wing media an opening to questioning your loyalties.”

Also in the Times, Peter Baker didn’t properly refute the accusation, but at least distanced himself from it with some choice euphemisms:

With the president’s allies joining in, the two aides found themselves condemned as nobodies, as plotting bureaucrats, as traitors within and, in Colonel Vindman’s case, as an immigrant with dual loyalties. Even for a president who rarely spares the rhetorical howitzer, that represents a new level of bombardment.

When two parties have a disagreement over the interpretation of facts, they deserve an equal hearing. But not here, where one party is establishing the facts, and the other is fighting them with no sense of decency.