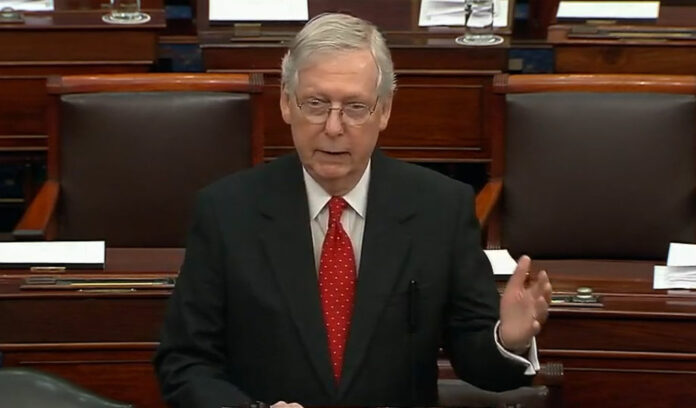 The impeachment trial in the U.S. Senate is the Mitch McConnell Show.

So it’s incumbent on Washington political reporters to share some of what they’ve learned about McConnell over the years.

The funny thing is that they’ve gotten so used to McConnell’s death grip on legislation, his maniacal fixation on stacking the judiciary, and his Palpatine-like control over his fellow Republican senators that they don’t think it’s even worth mentioning most of the time.

But McConnell’s motivations are essential context for a public trying to understand what’s going on in the Senate – and specifically, why McConnell is blocking Democratic attempts to introduce evidence that wasn’t available to the House.

The good news is that Mitch McConnell is not a hard guy to figure out. Indeed, countless, extensive profiles of him have concluded the same thing: that he is singularly uncomplicated. His only ideology is power. And he realizes that maintaining power requires money.

If it doesn’t help Republicans get elected, he’s not interested.

Here are three of the things reporters know about McConnell, but routinely fail to tell their readers and viewers:

His only political issue is money

As Alex Pareene wrote in the New Republic in March 2019:

Mitch McConnell is the great avatar of the decades-long enclosure of our public life by money. He does not offer a stirring vision of conservative national greatness or even ends-justify-the-means rationales for Senate horse-trading that depart from the disheartening transactional version of our politics that reigns in the Citizens United age. In Mitchworld, you simply pay—and pay, and pay—to play.

So the only issue that McConnell really cares about is opposing any limits to money in politics.

[O]ver the years, McConnell shamelessly, fluidly recalibrated his arguments based on what was more useful to him, and then his party, at that moment…..

McConnell knew first that unlimited fundraising was the key to his own political fortunes. He came to realize it was the best way for the Republicans to keep their power too, as unions declined and corporate power, along with income inequality, rose and rose. Republicans have a built-in advantage in a world of unlimited political spending.

That nothing else matters makes McConnell a truly singular political leader. As Pareene wrote:

Being a Senate majority leader who doesn’t care about almost any particular outcome to any particular political issue not directly related to making sure your funders can fund you actually seems to take quite a bit of pressure off, job performance–wise.

He has ruined the Senate

McConnell has dramatically transformed the U.S. Senate, from a place that once relied heavily on tradition and precedent and was less partisan and more deliberative than the House, into a slaughterhouse for any legislation that might hurt his donor pool.

McConnell is the first majority leader whose career has been built on the assumption that the Senate that could produce the great legislative works of his predecessors is a thing of the past — a fact that itself owes a great deal to McConnell. As minority and then majority leader during Barack Obama’s presidency, he fashioned himself as the essential impediment to Obama’s vision of a sequel to the Great Society, using tactics that were once the province of Senate factions as a strategic blueprint for the entire Republican caucus.

The unprecedented number of conservative-approved judicial nominees McConnell has waved through the Senate — a process for which he laid the groundwork before Trump was elected — stands to shift much of the burden of conservative policymaking away from an increasingly paralyzed Senate. In the coming years, battles over voting rights, health care, abortion, regulation and campaign finance, among other areas, are less likely to be decided in Congress than in the nation’s courthouses. In effect, McConnell has become a master of the Senate by figuring out how to route the Republican agenda around it.

As it happens, stacking the judiciary also serves another purpose, Alec MacGillis, the author of a 2014 biography on McConnell, wrote for ProPublica in June 2018:

Holding a long-term majority on the court greatly aids his highest cause — Republicans winning future elections — as recent rulings on voting rights and gerrymandering demonstrated once again.

As Bob Moser wrote for Rolling Stone in September 2019

For all the damage he’s inflicted on American democracy, for all the political corpses he’s left in his wake, Mitch McConnell has never betrayed an ounce of shame. To the contrary, like the president he now so faithfully serves, McConnell has always exuded a sense of pride in the lengths to which he’s gone to achieve his ambitions and infuriate his enemies.

Jason Zengerle wrote for Politico in 2013:

While most politicians desperately want to be liked, McConnell has relished—and cultivated—his reputation as a villain. After all, he achieved his iron-fisted grip on the politics of his home state and his fractious party on Capitol Hill through discipline, cunning and, oftentimes, fear. Which is why, at the moments that have found him happiest—winning elections, blocking bills, denying the sheen of bipartisanship to President Barack Obama—he has radiated not joy but menace.