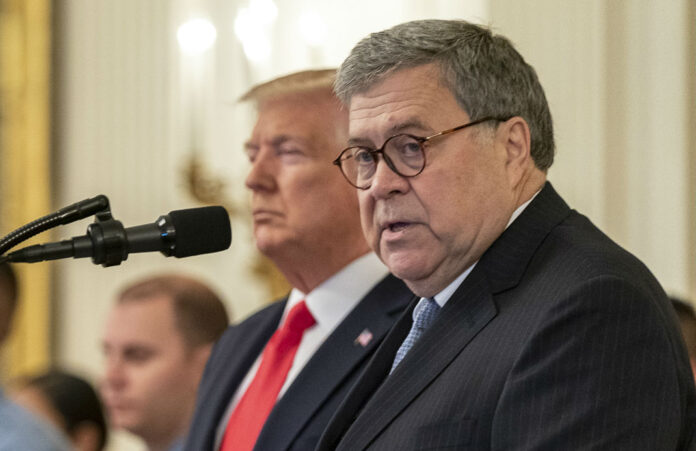 In a sign of how clickbait values have triumphed over journalistic skepticism, a rumor that Attorney General William Barr told some people that he was thinking of possibly resigning over President Trump’s Twitter habit was eagerly spread by the city’s top political journalists Tuesday night.

Washington Post reporters Matt Zapotosky, Josh Dawsey, John Wagner and Rachel Weiner further amped up the political juiciness by describing the alleged assertion of a resignation threat as “foreshadowing a possible confrontation between the president and his attorney general over the independence of the Justice Department.”

It was such an exciting scoop, they apparently forgot all the reporting they and others have previously done about the so many ways Barr has already violated the independence of the department to do Trump’s bidding.

“Administration officials” told the Associated Press that Barr had “told people close to him he’s considering quitting,” so they reported it, too. Reuters heard it from “a source familiar with the situation.” Two such sources confirmed it to CBS. An administration official told it to NPR.

You might have thought these journalists would know better. Only a few days earlier, several of their peers at our top newsrooms had been widely mocked for taking Barr’s televised show of huff at Trump on face value, rather than considering the possibility that it was just theatrics.

If you think about it for a minute, it’s really quite hard to take seriously: This is the line Barr won’t cross? Being tweeted at?

Over at the New York Times, Peter Baker, Katie Benner and Sharon LaFraniere reported the rumor at arm’s length – but with no shortage of drama. Noting that Trump continued to tweet his views about DOJ matters, they wrote:

Explicitly rebuffed, Mr. Barr was left by the end of the day to consider his own future. He expressed dissatisfaction to associates and his irritation soon fed news reports that he was considering resignation if the president continued to publicly weigh in on individual prosecutions of his own associates. But it was unclear whether that would persuade Mr. Trump to back off or only get his back up.

And reflecting the Times’s increasingly common rejection of quaint conventions like identifying its sources, they wrote with apparent omniscience about what was going on in Barr’s head:

Mr. Barr was especially irritated by the president’s tweet on Tuesday morning denigrating Judge Amy Berman Jackson shortly before she was to hold a conference call with lawyers in Mr. Stone’s case.

While Mr. Barr has been incredibly frustrated and has a limit to what he will put up with, people who know him said they doubted he would give in so quickly.

Who said Barr “has a limit to what he will put up with”? By granting the source anonymity — or in this case, not even citing a source — the Times puts its own credibility at stake.

Pushback elsewhere in the paper

An interesting development on Wednesday was that the critiques of a certain credulousness on the part of the Washington Post (and others) did not solely appear on Twitter (although there was plenty there) or in what you might call alternative media, but on the Washington Post website itself.

The Washington Post broke the news Tuesday night that Attorney General William P. Barr is telling people that he might resign if President Trumps keeps tweeting about Justice Department matters. And this has understandably been met with skepticism.

But do note this important sentence in the second paragraph of The Post’s story: “The administration officials said Barr seemed to be sharing his position with advisers in hopes the president would get the message that he should stop weighing in publicly on the Justice Department’s ongoing criminal investigations.”

In other words, this appears to be as much about a calculation as Barr’s own exasperation. It perhaps shouldn’t be taken completely at face value.

And he neatly explained some of the obvious backstory that his colleagues had left out:

Barr is clearly trying to balance tensions between a president he has so steadfastly stood behind and a Justice Department that is unnerved by what Trump is doing. Arguably no Cabinet secretary has bent over backward for Trump as much as Barr, with the possible exception of Secretary of State Mike Pompeo….

Whether he’d every actually make good on the threat is worth a healthy dose of skepticism. Barr has put up with a lot from Trump, and he has put his own reputation on the line repeatedly with his pro-Trump decisions. He has also launched unorthodox internal Justice Department actions that just so happened to meet with Trump’s very public requests for action. The combination has led more than 1,100 former Justice Department officials to call for his resignation.

Where Blake lost me, however, was at the very end of his piece, when he asserted that “at some point, personal pride has to be a factor”:

It seems to me it’s gone way past that already.

The debate over William P. Barr’s future as attorney general is unfolding in an alternate reality — in a place where it’s considered an open question whether President Trump will continue trying to corrupt law enforcement right out in plain sight.

In this magical place, Barr’s loyalists can leak word that, by golly, Barr just might quit if Trump keeps publicly trying to manipulate ongoing cases. This is meant to insulate Barr from Trump’s taint.

But in the real world, here’s what’s staring us in the face: For Trump, the very public nature of his efforts to corrupt law enforcement is a key feature of those efforts, not a byproduct of them that he pathologically can’t control.

As it happens, an article in Saturday’s New York Times by Peter Baker and Michael D. Shear helped me understand some of the political-journalist obsession with this story: It’s more like celebrity journalism rather than political journalism. In this case, there’s a  possible breakup.

“Once seen as a lock step partnership, it now may be the most complicated relationship in town,” Baker and Shear wrote. “The six blocks between the White House and the Robert F. Kennedy Department of Justice Building have become a political buffer zone and no one can be entirely sure what comes next.”

They briefly acknowledged – then waved off – the view that they have been and continued to be snookered:

Critics assume it is all a Kabuki dance, cynical theater meant to preserve Mr. Barr’s credibility as he executes Mr. Trump’s personal political agenda while pretending to look independent. And it is certainly true that, even now, Mr. Barr continues to demonstrate a willingness to personally take charge of cases with Mr. Trump’s interests at stake.

But insiders insist the tension is real, with potentially profound consequences for an administration that has redrawn the lines at the intersection of politics and law enforcement.

Reporters chasing after racy scoops for clicks and obsessing over possible breakups wouldn’t be such a dangerous thing during some other presidency. But under Trump, it provides a dangerous and deceptive gloss of normalcy over the administration’s complete lack of credibility.

I don’t believe a fcking word of this story. Not the reporters, mind you, but anything attributed to Barr. https://t.co/IqJrFzMBCJ

The ease with which Barr and his subordinates found uncritical homes for this self-serving drivel bodes poorly for when they start whispering to the same outlets about how the Dem nominee may be under investigation. https://t.co/n1lGOKLcpG