Media criticism, I am happy to report, is thriving these days.

If you are reading Press Watch, you’re not just reading my own media criticism, you’re seeing me link to all sorts of other folks making powerful and incisive observations about the political coverage they read and view and hear and how it could be better.

I think it’s safe to say that what drives most of us particularly crazy these days is how Donald Trump has exploited the chronic weaknesses of the mainstream political press like never before — chief among those its timidity and short attention span, and how it reflexively resorts to stenography, normalization and false equivalence.

What we want more than anything, of course, is to have an impact – to get reporters and editors at our top institutions to pay attention, consider our arguments, and start doing their jobs more effectively and assertively.

So I’m embarrassed to say that when one reporter actually responded to media criticism at some length this week, I missed it, until a reader emailed me about it.

Aaron Blake, a reporter at the Washington Post who writes for its political analysis blog, “The Fix”, on Wednesday published a post titled “4 overly simplistic criticisms of the media’s Trump coverage”.

Blake, I should note, has not been a target of mine — at least up until now. Looking through my archives I see I have been consistently impressed by his work. I’ve linked favorably to several of his pieces, including a devastating analysis on March 3 of an event where Trump displayed profound cluelessness about what’s involved in fighting a pandemic and an excellent exegisis on March 21 of Trump’s livid rant at NBC reporter Peter Alexander.

1. Trump “distracts” the media from news he doesn’t want covered

This argument has always struck me as giving Trump too much credit. He’s thin-skinned and he’s impulsive, and there is myriad evidence to suggest that much of this is just Trump being Trump.

But the two views are not mutually exclusive. Whether or not Trump does it on purpose, the media does allow itself to get distracted. Reporters turn his every crazy statement and new threat into the top story of the day — when right now the top political story of the day, every day, should be some aspect of his continued failure to save American lives during a pandemic.

And in some cases, Trump is very clearly trying to distract the media, in particular by blame-shifting. As I wrote on April 30, for instance:

In a transparent attempt to distract from his continuing failure to lead an effective response to a disastrous public health crisis, the great showrunner in the White House is in the process of introducing a new story arc: an epic battle with an evil China.

2. The media should ignore the crazy things Trump says and then they’ll go away

Blake cites a recent column from the Post’s own media writer, Margaret Sullivan, on the over-coverage of “Obamagate.” Sullivan wrote that “we have failed to learn very much, if anything, about how much attention to give exaggerated pseudo-scandals — which in this case should be nothing at all.”

Blake also cites a post about “Obamagate” by Vox by writer Sean Illing, who wrote that “[t]here’s no point in unpacking this theory here because it’s bullshit and everyone knows it.”

Blake himself, by contrast, writes that ignoring things like “Obamagate” isn’t responsible, given that “we have an entire media ecosystem in which baseless conspiracy theories can spread like wildfire.”

But there’s a more nuanced criticism than Blake acknowledges here.

If they are spreading, then yes, the normal media needs to respond. In fact, that needs to happen outside of traditional fact-checking, which tends to be ghettoized and passive-voiced.

Fact-checking is fine for false assertions. The proper news response to malicious conspiracy theories is not just to debunk them, but to explicitly address who’s spreading them and why.

At the same time, there are some things Trump says that the media should completely ignore — especially when he’s endlessly repeating himself and spreading misinformation during a pandemic. Here’s what I wrote in March:

At a time when accurate information could save lives and disinformation could kill, Donald Trump continues to tell self-aggrandizing lies and political journalists continue to put them in their headlines…

[G]oing forward, the most vital message reporters should convey about Trump – over and over again — is that he is out of touch with reality and failing to lead.

And in the absence of that leadership, our elite newsrooms need to step up. This is a time for our nation’s best journalists to enable our nation’s smartest people to set the agenda, rather than waiting for the White House to do it.

3. The media fails by not calling Trump’s false statements “lies”

Blake notes that “Trump has made more than 18,000 false or misleading claims as president, according to The Washington Post’s Fact Checker.” But, he writes:

The call-it-a-lie pushback kind of misses the forest for the trees. And that point is this: Is it really better that a president might be so fundamentally unfamiliar with basic facts? That’s very arguably a bigger indictment of his presidency than anything else. Is being nefarious better than being devoid of any understanding of the kind of facts that any regular person — much less someone tasked with running this country — should grasp?

Again, Blake overly simplifies the critique. Press critics like me aren’t saying that everything Trump says that’s wrong is and should be called a lie. We are saying that the impetus behind a given false statement — whatever it is — needs to be addressed.

And while reporters may in some cases not be able to easily and irrefutably discern Trump’s motivation, they can still narrow down the options. In some cases, they can certainly say he is deliberately lying, especially when he has been repeatedly corrected. In other cases, it’s more accurate to say that he’s simply being incoherent, or that he appears to be deeply ignorant and clueless, or that he’s being delusional, or gaslighting the public, or both.

As I wrote in March, at the very least news organizations should immediately start adding some sort of warning label every time they quote or paraphrase the president – especially when it comes to a life-or-death public-health issue:

I recommend some variation of the language from a recent Washington Post article – noting that “[m]uch of what Trump has said has been contradictory or false” – or a recent New York Times article – saying that “Trump has continually made false statements and misinformed the public about the severity of [the] virus” – along with something to the effect of “some of his assertions indicate either delusion or an attempt to make the public doubt their own sense of reality.”

4. The media is failing at covering Trump, because skeptical coverage hasn’t impacted him

It’s not that the media has failed to make the case that Trump is dishonest and makes stuff up, Blake argues, it’s that Trump supporters don’t really seem to care:

It may simply be a time in which 4 in 10 Americans will support whoever is speaking to their concerns and partisan predilections — and that they care significantly less about the details.

But I think that’s a cop-out. I don’t think the normal media has tried nearly hard enough to get Trump supporters to understand how profoundly he has failed them –- and the white working class in particular. Reporters should be looking at what Trump supporters care about, and then assertively describing Trump’s record in those areas.

I also think that Trump supporters’ resistance to the real news is itself a fascinating news story. I wish more reporters and editors would committ themselves to the kind of intensive, empathetic interviews necessary to really figure out what’s going on there – and figure out if it’s curable.

But the biggest failing, I think, comes in how the day-in-day-out coverage of Trump written and broadcast by our major news organizations is intentionally produced in a way not to  offend Trump supporters.

When I read or watch mainstream news coverage about Trump I often get the sense that the reporter is putting the facts out there, but making a conscious effort not to reach the obvious conclusion. They call that “letting the reader connect the dots.”

“In my mind, I think of the reader, who just wants to pick up his paper in the morning and know what the hell happened — I’m beholden to that reader, and I feel obligated to tell that reader what happened,” Baquet said.

Baquet and his reporters know that their core audience will successfully connect the dots, so no harm done, right?

But what about the people who don’t connect the dots by themselves? In Baquet’s world, I’m guessing that’s a win, too. Sure, they never really understand the full scope of the story, but if the Times connected the dots for them, those people might get upset. They might cancel their subscriptions.

And consider this: New York Times stories don’t appear only in the New York Times. They’re highly and lucratively syndicated to news organizations around the country. I’ll bet a lot of those readers don’t connect the dots.

But again, that’s a win for Baquet & Co., because those newspapers don’t get angry letters from their readers demanding they stop running Times stories.

Yes, I’m suggesting that’s the industry’s business model: Don’t connect the dots because it will lose us money.

But that leaves a lot of readers not really getting the full story — a lot of Trump supporters, unreached.

And I can’t help but notice that Fox News and its ilk always connect the dots.

So in my view, it’s not that normal news organizations are presenting the truth and Trump supporters don’t care, as Blake suggests. 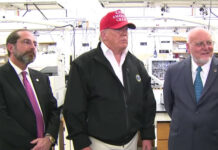 Time to tune Trump out