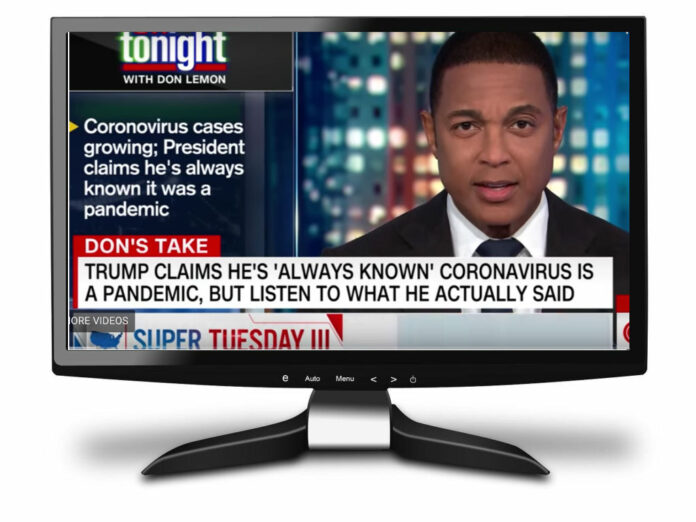 Donald Trump gave the media exactly the excuse it needed on Tuesday to properly qualify his statements going forward.

By insisting that he had “always” taken the coronavirus seriously – and that in fact he “felt it was a pandemic long before it was called a pandemic” – Trump was either being delusional, or engaging in gaslighting, or both.

There are really only three alternatives: Either he actually believes what he said despite the fact that it is completely contradicted by the actual timeline in which the rest of us live; or he is not only lying but affirmatively trying to make people forget, disregard and deny the truth; or some combination of the two.

As a result, news organizations should immediately start adding some sort of warning label every time they quote or paraphrase the president – especially when it comes to a life-or-death public-health issue.

I recommend some variation of the language from a recent Washington Post article – noting that “[m]uch of what Trump has said has been contradictory or false” – or a recent New York Times article – saying that “Trump has continually made false statements and misinformed the public about the severity of [the] virus” – along with something to the effect of “some of his assertions indicate either delusion or an attempt to make the public doubt their own sense of reality.”

Katie Rogers of the New York Times and Don Lemon of CNN were standouts in their response to Trump’s gaslighting on Tuesday.

Rogers’s report was way too heavy on euphemisms but still deserves kudos for making Trump’s big lie the main thrust of the story, rather than, say, quoting him at length before eventually pointing out that he was talking complete smack.

Under the headline “Trump Now Claims He Always Knew the Coronavirus Would Be a Pandemic,” Rogers wrote:

The president tried to rewrite his history with advising Americans about the coronavirus. His own words prove him wrong.

Despite his “more urgent tone in recent days,” Rogers wrote, “his assertion on Tuesday that he had long seen the pandemic coming was the most abrupt pivot yet from the voluminous number of claims and caustic remarks he has made about the disease.”

Besides denying the seriousness of the coronavirus over the past two months, he had also displayed an acerbic tone toward people who took it more seriously.

Another theme has been the president’s offering inaccurate information.

Some normally critical readers on Twitter cheered. That included Larry Glickman, a historian at Cornell University:

I hope this new approach of the Times–which properly makes Trump's lies the focus of the story, rather than echoing his bs claims in the headline and lede, only to debunk them in paragraph six–becomes the norm in covering him. https://t.co/8WcXvUXhIv

So everyone knows I'm a big critic of the @nytimes political coverage of @realDonaldTrump but @katierogers shows her peers at the paper of record how it's done. She goes step-by-step through Trump's lies and doesn't mince words. @deanbaquet: she's the one. https://t.co/OeQuRgJo1X

Anatomy of a gratuitous lie: after mocking virus warnings , he claims he knew the danger all along https://t.co/uBPWGSDcGk

The President of the United States is gaslighting you, and you deserve to know. Claiming today that he has known all along that the coronavirus is a pandemic.

After serving up more than half a dozen clips of Trump shrugging off, mocking, and otherwise belittling the consequences of the virus, Lemon resumed:

Like I said, this is gaslighting pure and simple. The President of the United States has been making demonstrably false statements from the beginning of all of this at a time when real leadership could have saved lives.

Other journalists also rose to the challenge.

This was another of Trump’s brazen attempts to rewrite a history that played out in public view.

The point of this revisionist history is to retroactively wipe away Trump’s own negligence, to make his repeated efforts to play down the virus fade into the mist. In the new version of history, we didn’t go through a period where people were begging Trump to take it seriously; instead, we all realized what was happening at exactly the same moment.

And he explained why conservative media is adjusting accordingly:

In the world created by Fox News and conservative talk radio, policy issues and ways of understanding controversies are fluid and subject to change.…

What is unchanging are the meta-themes that run through all their coverage: The world is frightening and dangerous. Things were better in the past. White people are besieged and put-upon, while ungrateful minorities have all the advantages. The non-conservative media always lie and so can never be trusted; only what we here at Fox News and other conservative outlets tell you is true.

Beside all those meta-themes, which have been in operation for a few decades now, is one of more recent vintage: Trump is always right. He was right yesterday, and he’s right today, even if yesterday he said the opposite of what he’s saying today.

Atlantic national correspondent James Fallows, under the headline “Trump Is Lying, Blatantly,” did some psychologizing:

[T]hat he believes he can baldly zap away all memory of his words and deeds and reinvent himself as the man saving his country from pandemic—another Anthony Fauci, but with executive powers—reveals something  about Trump’s mind and character, and something about his assessment of public life.

I've covered lots of regimes that rewrote history. But it was almost never so blatant as Trump's 180-degree switch over one month and his insistence that he was always worried about the coronavirus pandemic. This reflects a scorn for any idea of truth.

New York Times opinion columnist Paul Krugman wondered “how much Trump’s inability to admit error is hurting things now. Investors seemed relieved that he was finally showing hints of realism about the coronacrisis, but then he undercut that with ludicrous gaslighting.”

The record—the words that actually came out of his mouth—of what Trump has said about COVID-19 is devastating. Tragic.

The president’s false, misleading, cavalier, and ill-informed comments as this pandemic emerged will end up costing thousands of lives.
https://t.co/nh8PLlHOjB

Having argued, to his satisfaction, that he responded with alacrity to the coronavirus crisis, Trump held yet another news conference on Wednesday, in which attempted to place the blame for any slow response on China.

He opened his remarks by talking about “our war against the Chinese virus.” He later called himself a “wartime president.”

Asked why he keeps using the term “Chinese virus” despite cases of anti-Asian-American bias, Trump repeated twice “It comes from China.” He denied any racism on his part, and made it clear that he was bristling against a Chinese official’s conspiracy theory blaming American soldiers.

You could literally see him start shifting the blame. “It was nobody’s fault. This happened. Some people could say it was somebody’s fault, actually,” he said.

And later, he finished that thought: “I don’t know if you’d say China is to blame. Certainly we didn’t get an early run on it. It would’ve been helpful if we knew about it earlier.”

[Read more Press Watch coverage of Trump and the coronavirus]