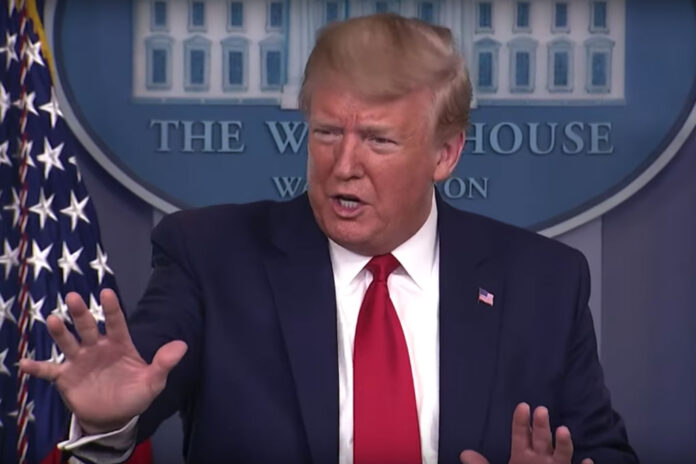 It was amazing to watch just how upset Donald Trump got on Monday night when reporters asked him about a new, fact-filled report about how hospitals across the nation have been dealing with the coronavirus pandemic.

The report, from the Department of Health and Human Services inspector general’s office, was a summary of brief telephone interviews with 323 hospital administrators from across the country during the last week of March. It was intended purely to provide HHS officials “and other decision-makers” with “a national snapshot of hospitals’ challenges and needs.”

Its chief finding was that many hospitals reported severe shortages of testing supplies and extended waits for test results, limiting their ability to monitor the health of patients and staff, and putting a strain on hospital beds, personal protective equipment, and staffing.

This wasn’t a critique of anything or anyone. It was just a reality check.

And that’s exactly why it sent Trump into a sputtering rage, lashing out at imagined enemies and mocking the very notion that anyone he didn’t appoint should be in a position to hold him accountable.

Ironically, the initial question during Monday’s news conference came from Fox News Reporter Kristin Fisher. In case you missed it, the exchange is worth reading or watching in its entirety.

Trump interrupted Fisher’s question before she was even done, mocking its source. “Did I hear the word ‘inspector general’? Really? It’s wrong.”

Fisher returned to the issue later.

We have a brand new testing system that we developed very quickly and that’s your result. And you should say, congratulations. Great job. Instead of being so horrid in the way you ask a question.

In reality, not only is the rate of testing per capita in the U.S. well below several other countries’, but it needs to be magnitudes larger if the nation is every to return to anything remotely like normalcy.

Trump also lashed out at ABC News reporter Jonathan Karl with bitter sarcasm, accusing him of hiding the fact that the report was issued by someone he didn’t pick – in this case, by Christi Grimm, a 21-year veteran of the office who was appointed principal deputy inspector general in January 2017. Trump never got around to nominating anyone to replace the previous inspector general, who resigned in June 2019.

Trump: How long has that person been in government?

Karl: They did serve in the previous administration.

Trump: You’re a third rate reporter and what you just said is a disgrace, OK? You asked me, you said, “sir, just got appointed.” Take a look at what you said now. I said, “When did this person, how long in government?” Well, it was appointed in the Obama administration. Thank you very much, Jon. Thank you very much. You will never make it.

And on Tuesday morning, Trump was still going, tweeting:

Why didn’t the I.G., who spent 8 years with the Obama Administration (Did she Report on the failed H1N1 Swine Flu debacle where 17,000 people died?), want to talk to the Admirals, Generals, V.P. & others in charge, before doing her report. Another Fake Dossier!

CNN’s Stephen Collinson got it exactly right when he wrote:

President Donald Trump’s contempt for science and disdain for experts who question his political narratives are driving his increasingly defensive and brittle management of the coronavirus pandemic.

Trump was short-tempered and rude during much of his daily briefing on Monday as he refused to even listen to questions about shortcomings in the federal government effort.

[Trump’s] feuds with reporters on other issues Monday underscored his wider reluctance to allow inconvenient evidence to mar his cultivated picture of hugely successful leadership amid the worst domestic crisis since World War II….

One reason why Trump appeared to be flailing in recent news conferences may be that his political approach — based on denying robust fact-based evidence — is being badly exposed.

There’s no evidence to suggest anything about the report is wrong, or that it was somehow politically motivated.

I’ve written before that Trump’s daily appearances shouldn’t be widely broadcast live, and should be annotated so that journalists can put what he says in context as he speaks.

I wrote on Monday that, rather than ask incremental questions, reporters who attend should at least ask Trump big questions, like: What’s the plan? When will it be safe to go out again? How will we know?

But there’s also some value in simply confronting Trump with the facts and watching him explode in fury, attacking the questioner, attacking the source, blaming others and generally refusing to take any responsibility for what’s actually going on. The facts are his greatest enemy, and the public needs to understand that.

He has survived other challenges to his presidency — including the Russia investigation and impeachment — by fiercely contesting the facts arrayed against him and trying to control the public’s understanding of events with streams of falsehoods.

The coronavirus may be the first crisis Trump has faced in office where the facts — the thousands of mounting deaths and infections — are so devastatingly evident that they defy these tactics.