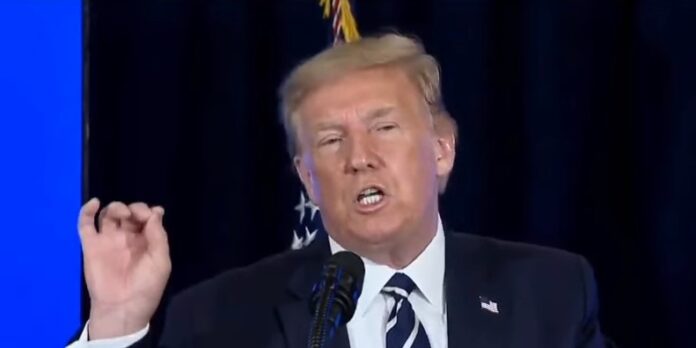 I get it. They’re tired. And it’s hard to summon outrage anymore.

But still, there’s no excuse for the lackluster reporting from major news organizations about Donald Trump’s announcement on Saturday evening that he wants to permanently eliminate the payroll taxes that fund Social Security and Medicare.

Decoupling Social Security’s funding from the payroll tax would either drain it of money or, at best, make it subject to the year-to-year political whims and gamesmanship of Congress and the president.

To defenders of the social safety net, Trump’s call was clearly an act of war.

And you might think that political reporters would take notice when a president seizes with both hands what has historically been called the “third rail of American politics.”

But to our major news organizations, it was just another day in Trumpland.

Among several other actions, Trump on Saturday released a memo (not an executive order) calling for the deferral of four months of payroll taxes starting in September. He also declared: “If I’m victorious on November 3rd, I plan to forgive these taxes and make permanent cuts to the payroll tax. So I’m going to make them all permanent.”

In Monday’s Washington Post, Tony Romm, Erica Werner and Jeff Stein understated Trump’s vow, writing that his goal was only “to make the deferred payments into a permanent tax cut.”

It wasn’t until the end of their article that they indicated more might be at stake:

Retirement benefits historically are sacrosanct in American politics, and Trump’s mere suggestion that he may seek permanent reforms to the way they are financed raised immediate concerns that it could lead to lasting changes to the monthly checks paid out to seniors.

The Associated Press airily noted that Trump “raised the possibility of making [the payroll tax deferral] permanent, though experts said he lacked that authority.”

And there was nothing on the New York Times’s front page on Sunday or Monday to suggest any cause for alarm.

You know what all the reporters covering Trump for major news organizations have in common? They’re unflappable.

Trump says something, they write it down. Maybe in a few weeks, it will become conventional wisdom that Trump’s vow to cut the payroll tax was an outrage, an act of impetuousness and malice and lunacy, a gift for his grifter friends. But for now, the news reports won’t tell you what you need to know.

For that, as is so often the case these days, you have to turn elsewhere: Specifically, to the opinion writers.

This order, along with comments Trump made at the signing ceremony, poses a mortal threat to the 64 million Americans who currently receive Social Security benefits and the hundreds of millions more who will receive benefits in coming decades.

William J. Arnone, chief executive of the National Academy of Social Insurance, told Hiltzik: “This is all a very well thought-out campaign to undermine Social Security and Medicare.”

And Hiltzik pointed out the trap Trump set when he announced that Democrats “will have the option of raising everybody’s taxes and taking this away”:

In other words, he’s offering voters a bribe — in effect, “elect them and you’ll have to pay what you owe; elect me and you’ll get a pass.”

Washington Post business columnist Allan Sloan wrote that Trump’s proposal only makes sense “if it is to undermine Social Security and stir up class and generational warfare”:

Step back and look at the big picture — and listen to Trump say that he’ll eliminate Social Security tax next year should he be reelected — and you realize that if Trump prevails, it would likely mean the end of Social Security as we’ve known it.

The net effect, Sloan wrote, is “to undermine Social Security by turning it into just another federal spending program rather than a program funded by a dedicated payroll tax and a $3 trillion trust fund.”  He explained that “having Social Security funded out of general tax revenue would make it immensely vulnerable to political and financial pressures.”

New York Times opinion writer Paul Krugman hasn’t written a column on the topic, but he posted what may be the most memorable, salient tweet about the whole idea:

I don't know if anyone else has said this, but payroll tax cuts are the hydroxychloroquine of economic policy. They won't do anything to solve the employment crisis, but will have dangerous side effects. Yet Trump remains obsessed with them as a cure 1/

Democratic leaders seized on what Trump said, with no misunderstanding. Presumptive Democratic presidential nominee Joe Biden said in a statement on Saturday. “He is putting Social Security at grave risk at a time when seniors are suffering the overwhelming impact of a pandemic he has failed to get under control. And make no mistake: Donald Trump said today that if he is re-elected, he will defund Social Security.”

Trump’s payroll tax proposal had gotten exactly nowhere in Congress, where neither Democrats nor Republicans expressed any support the for the idea.

Despite Trump’s delusional claim Saturday that “everybody wants it,” its only champions appear to be – surprise – the same people who have been trying to destroy Social Security for decades, either because they think it’s too expensive and will lead to higher taxes over time, or because they would rather have Wall Street get a cut, or both.

It also has nothing to do with responding to the Covid-19 crisis. Trump has been talking about a payroll tax cut since 2017. He told Fox News’s Sean Hannity in early April of this year “I’d like to have the payroll tax cut regardless of this problem that we just — that just arose recently.”

And as Hiltzik (and others) have noted time and time again, cutting the payroll tax does nothing for those out of work, because they’re not on the payroll.

But Trump’s plot is still insidious. In the short run, it’s a bribe to the middle class that his Democratic successor will have to take the political hit for taking away again.

And in the longer run, even if funding were miraculously restored – “we’re going to, through the general funds, reimburse” Trump said breezily on Sunday — such a move would change the essential nature of the Social Security program.

The fact that workers “pay into” the system has always been key, giving them a sense of ownership. At the same time, those dollars fund a program that is way more humane and progressive than I could imagine any modern Congress reliably supporting on a year to year basis.

Today, Social Security provides benefits to about 63 million Americans, not only to retired workers but also to the spouses and dependents of workers who die prematurely and to disabled workers and their dependents.

And it involves massive subsidies — not only from the next generation of retirees to this one, but from single workers to married couples, from two-earner couples to one-earner couples, from high-income earners to low, from the able-bodied to the disabled, and from those who die early to those who die late. (I’m cribbing here from the 1999 Social Security special report that I wrote for the Washington Post.)

It’s a magnificent, beloved program that is central to the modern American experience. That Trump is trying to undermine it should arouse massive indignation in even the most unflappable of us.