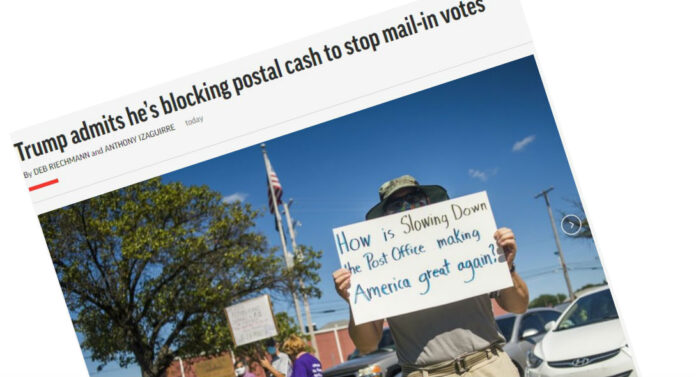 The reporting in the New York Times, the Washington Post, and the Associated Press was uncompromising: Donald Trump on Thursday fueled a false and racist “birther”-style conspiracy theory about Kamala Harris.

The Post and the AP also reported without any hesitation that Trump admitted that he is starving the Postal Service of funds in order to block mail-in voting. (The Times, pathetically, reported that Trump’s statement “stirred new questions.”)

But on the major network evening news shows – with their huge audience of lower-information voters – Trump’s Postal Service admission was “bold” and “direct.” (His birther lie, which came just before showtime, didn’t make any of the broadcasts.)

The big print firehoses get the most attention from media critics like me. Maybe that’s a mistake.

ABC’s “World News Tonight” is the most-watched show in all of television, with nearly 9 million viewers a night. And there, namby-pamby bothsideism still rules.

On Thursday night, guest anchor Tom Llamas introduced a segment on “President Trump’s bold admission that he wants to block new funding for the U.S. post office to help with expanded mail-in voting during the pandemic.” (He’s actually blocking more funding than that.)

Correspondent Mary Bruce then reported that Trump “bluntly admitted he wants to block billions of dollars from the post office to try and prevent Democrats from expanding mail-in voting” – making it sound like just another partisan squabble.

After several quotes from Trump, Bruce did note that Trump “has claimed without evidence that mail-in voting leads to widespread voter fraud, but he’s also admitted he thinks expanding mail-in voting will hurt Republicans.”

But then she muddled the issue, telling Llamas that Trump, at his Thursday afternoon briefing, “seemed to suggest to reporters just now that he would be willing to negotiate and fund the postal service but just at a lower amount.” Trump’s comments were neither clear nor credible.

And there was no indication of how dangerous and unprecedented Trump’s assault on the Postal Service really is.

On the NBC Nightly News, anchor Lester Holt promoted the segment at the top of the show by saying: “Post Office in crisis, and what the president just said about funding desperately needed for mail-in voting.”

White House correspondent Kristin Welker set up Trump’s quotes simply by saying that he had offered “his most direct explanation yet about why he is refusing Democrats’ demands for billions of dollars for the Postal Service and mail-in voting.”

The CBS Evening News didn’t cover it at all, even though several media observers on Thursday argued that it should be the top story of the day.

What’s a better way to cover these stories?

The Associated Press’s Deb Riechmann and Anthony Izaguirre wrote that Trump “frankly acknowledged Thursday that he’s starving the U.S. Postal Service of money in order to make it harder to process an expected surge of mail-in ballots, which he worries could cost him the election.”

President Trump on Thursday said he opposes both election aid for states and an emergency bailout for the U.S. Postal Service because he wants to restrict how many Americans can vote by mail, putting at risk the nation’s ability to administer the Nov. 3 elections.

Trump has been attacking mail balloting and the integrity of the vote for months, but his latest broadside makes explicit his intent to stand in the way of urgently needed money to help state and local officials administer elections during the coronavirus pandemic. With nearly 180 million Americans eligible to vote by mail, the president’s actions could usher in widespread delays, long lines and voter disenfranchisement this fall, voting rights advocates said.

And the coverage of Trump’s birther lie was  even blunter:

Katie Rogers wrote in the New York Times that Trump “encouraged a racist conspiracy theory that is rampant among some of his followers: that Senator Kamala Harris, the presumptive Democratic vice-presidential nominee born in California, was not eligible for the vice presidency or presidency because her parents were immigrants.”

She followed that with a blunt, two-sentence paragraph: “That assertion is false. Ms. Harris is eligible to serve.”

President Donald Trump on Thursday gave credence to a false and racist conspiracy theory about Kamala Harris’ eligibility to be vice president, fueling an online misinformation campaign that parallels the one he used to power his rise into politics.

Asked about the matter at the White House, Trump told reporters he had “heard” rumors that Harris, a Black woman and U.S.-born citizen whose parents were immigrants, does not meet the requirement to serve in the White House. The president said he considered the rumors “very serious.”

The conspiracy theory is false. Harris, who was tapped this week by Joe Biden to serve as his running mate on the Democratic ticket, was born in Oakland, California, and is eligible for both the vice presidency and presidency under the constitutional requirements. The question is not even considered complex, according to constitution lawyers.

They also included this important context:

Trump built his political career on questioning a political opponent’s legitimacy. He was a high-profile force behind the so-called “birther movement” — the lie that questioned whether President Barack Obama, the nation’s first Black president, was eligible to serve. Only after mounting pressure during his 2016 campaign did Trump disavow the claims.

And Anne Gearan and Colby Itkowitz wrote in the Washington Post that “Trump, in an echo of his false birtherism claims against President Barack Obama, said Thursday that questions about the eligibility of Sen. Kamala D. Harris to run for vice president were ‘very serious’ despite the fact that they are baseless.”

Honorable mention on Thursday goes to HuffPost White House correspondent S.V. Dáte, who was on pool duty and finally asked the question he and others have long been wanting to hear: “Mr. President, after three and a half years, do you regret at all, all the lying you’ve done to the American people?” Trump didn’t answer, he just moved on.

I would have listed a few specific lies, for good measure. Or, alternately, I wouldn’t have asked him a question at all – what’s the point? – I would have told him what public-health experts say he is failing to do, or I would have simply given him a reality check, by presenting some of the facts that evidently don’t penetrate his bubble.

But there was something very cathartic about hearing a member of the press let him know to his face that at least some of us are on to him. 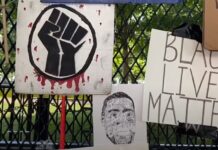 .@GustavoArellano is a treasure. And so is his wife.

MY @LATIMES COLUMNA: At my wife’s Santa Ana market, the masks have never come off. RT, porfas! https://www.latimes.com/california/story/2021-08-04/mask-mandate-restaurants-covid-19

That's one cop brought to justice for brutally attacking a #BlackLivesMatter protester.

NEW: Former @LMPD officer pleads guilty to hitting kneeling protester in the head in May 2020.
Cory Evans faces up to 48 months in prison under terms of the plea agreement.
https://www.wdrb.com/in-depth/former-lmpd-officer-pleads-guilty-to-hitting-kneeling-protester-in-the-head-in-may-2020/article_5e668210-f534-11eb-8b2e-4f7fd776a343.html

By contrast, a question like this, which differentiates neither between the respondents nor the media outlets, is essentially useless. https://files.kff.org/attachment/TOPLINE-KFF-COVID-19-Vaccine-Monitor-July-2021.pdf

Smart criticism of the news coverage, too. But @zeynep's NYT column mysteriously includes no critique of the NYT itself, despite its own major role in the hype. Was it ever there? Was it taken out? https://www.nytimes.com/2021/08/04/opinion/cdc-covid-guidelines.html?smid=tw-share