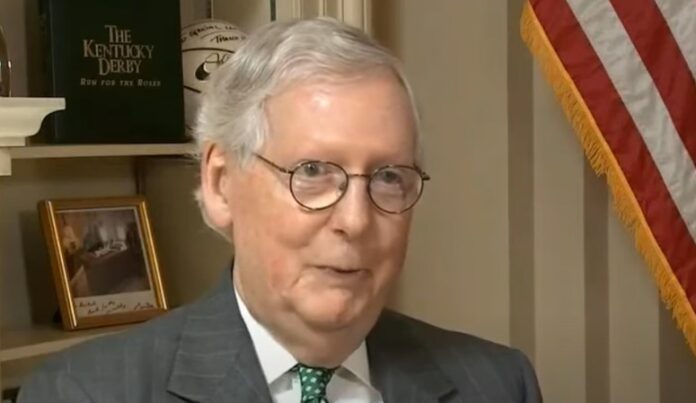 Republican congressional leaders are flagrantly ginning up a major political and financial crisis — safe in the knowledge that the Washington press corps will blame both sides.

At issue is a formality: raising the debt ceiling so that the U.S. government can continue paying the bills as previously appropriated by Congress.

But Republicans are refusing to go along, threatening a catastrophic government default and shutdown that could send the U.S. economy into an immediate recession and destabilize global markets.

They’re saying that keeping the government solvent is a Democratic problem now.

It’s an abandonment of the responsibility of governing. It is aberrational behavior by a political party that is willing to take extreme and potentially damaging action to score political points. It’s a hostage crisis.

And by not calling it out for what it is, the political press is enabling it.

Predictably, the Washington Post on Tuesday headlined its story “U.S. careens toward shutdown, financial crisis amid congressional stalemate.” Reporter Tony Romm describes — but doesn’t question –the “political standoff” in which Republicans “refuse to raise the cap out of opposition to President Biden’s broader agenda — even if it means grinding the country to a halt.”

And if the blame is generally apportioned to both sides, it nevertheless seems like the onus is always on Democrats to fix the problem.

As Romm’s Washington Post colleague Jeff Stein writes, “The White House is in a bind” because “GOP lawmakers refuse to help Democrats avert a national financial catastrophe, leaving the administration with few easy answers as time runs out.”

Stein notes that Senate Minority Leader Mitch McConnell “has not communicated any requests to the administration of what he wants in exchange” for Republican votes. Then Stein decries the fact that “there are no negotiations to resolve the impasse.”

The Associated Press characterized the Democratic effort to push ahead with a vote as “all but daring Republicans who say they will vote against it despite the risk of a fiscal crisis.”

And rather than acknowledge that threatening shutdown and default is a now a go-to for an increasingly anti-government Republican Party, the AP benignly calls this “an all-too-familiar stalemate.”

Democrats chose to combine stopgap legislation to keep the government funded with the debt ceiling suspension – neither of which should be remotely controversial. New York Times  reporters Emily Cochrane describes the move as “setting up a clash with Republicans.”

Coming pretty darn close to putting the blame entirely on Democrats, Cochrane writes that “the decision by Democratic leaders to attach it to legislation lifting the federal debt limit through Dec. 16, 2022 could ultimately jeopardize a typically routine effort to stave off a government shutdown, heightening the threat of fiscal calamity.”

Bloomberg headlined its piece “Democrats Dare GOP, Link Debt Limit to Vital Spending Bill.” Reporters Erik Wasson and Billy House write that “neither side has articulated a strategy for getting past the standoff and avoiding a default, which Treasury Secretary Janet Yellen has warned would cause ‘irreparable harm’ to the U.S. economy.”

Another advantage for the GOP is the distraction that this debate creates from actually serious issues that Democrats are trying to address. It also gives reporters the opportunity to write about Democrats in disarray. From a Monday Post article by Tony Romm:

For now, the political eruption sets up a furious, last-minute sprint for [Democratic leaders] Pelosi and Schumer in the final weeks of September, a period during which they had hoped to focus their attention on securing roughly $4 trillion in new initiatives targeting healthcare, education, immigration, infrastructure and climate change. It also marks one of the most significant tests to date for Democrats’ narrow yet powerful majorities — as well as Biden’s political prowess in keeping his party together.

Former New York Times reporter Catherine Rampell is now free to point out the obvious, as an opinion columnist for the Washington Post. “Democrats always have to be the grown-ups and prevent infantile Republicans from trashing the Constitution and causing a global catastrophe,” she writes. “[T]hat’s apparently how our government works now.”

Rampell also explains why Democrats aren’t keen on shoving the debt ceiling increase into the budget package they intend to pass with a simple majority vote in the Senate, using the “reconciliation process.” “The reconciliation process… allows only raising the debt limit to a specific number, not suspending it. Democrats worry that Republicans will exploit voter confusion and mount (misleading) attacks against Democrats about that scary new number,” Rampell writes.

So it’s really all about campaign ads.

How can the Republicans be so confident that the mainstream media won’t make it clear who’s to blame? Because it’s so damned predictable.

In 2013, when Senator Ted Cruz and his fellow Republicans shut down the government for 16 days in an attempt to defund Obamacare, the Washington Post blamed it on a “bitterly divided” Congress that “failed to reach agreement,” while the New York Times called it “a bitter budget standoff” left unresolved by “rapid-fire back and forth legislative maneuvers.”

As I wrote at the time, how can democracy self-correct if the public does not understand where the problem lies? And where will the pressure for change come from if journalists do not hold the responsible parties accountable?