And it’s so much easier to cover the White House when there’s only one person whose views matter and they’re constantly in your face, as compared to having to keep track of a whole building of knowledgeable, well-intentioned people actually going about the business of trying to make the world a better place.

So is it any surprise that they consider Biden a failure?

White House reporting, of course, should be much more than following after presidents hoping they’ll say something really scoopy and out there.

The foremost concern of the White House reporter should be: How is the president governing? Are they making things better? And are they doing it fast enough? (See my Jan. 21 column, “After obsessive focus on Trump, White House reporters need to zoom way out“.)

There is no doubt that Biden is a flawed president, and person, and that the party he leads is riven by a bitter and significant struggle over whether corporate money or people power is the key to electoral success .

Similarly, there’s plenty of cause for disappointment among anyone who thought a Biden administration would end the pandemic, save the economy, fix all the things Trump broke, rally Repulbicans, and shift the nation’s attention to addressing existential challenges like climate change and inequality – certainly if they though he’d do all that in his first year.

But by any normal standard, he’s not a failure. Things are, at the very least, looking up.

The press coverage, however, is overwhelmingly negative, giving Biden and Democrats almost no credit for what has been accomplished, while serving as a megaphone for deceptive Republican gossip and scare stories.

Daily coverage of Biden’s two major legislative packages has consistently betrayed a profound lack of interest in what they contain, what problems they are trying to address, and what the effects would be. Mostly, the articles are about when the bills run into trouble, with their unprecedentedly broad range of content summarized into clauses considerably shorter than a tweet. (It’s not a “social safety net bill“!)

The progress of those bills has been messy, partisan, and slow. But that’s often how legislating works.

One deadline blown amounts to nothing, in retrospect. But for political reporters like Jonathan Weisman and Emily Cochrane of the New York Times, each delay was a hearkening of doom. Think back to Sept. 30 — one of the several days that, in the greater scheme of things, had no consequence – when Weisman and Cochrane embarrassed themselves by writing that “the delay was a humiliating blow to Mr. Biden and Democrats,” that Biden had “staked his reputation as a deal-maker on the success of both the public works package and a far more ambitious social policy bill,” and that it was “not clear when or even whether either would have the votes — and whether Mr. Biden’s economic agenda could be revived.”

All that ink and pixels devoted to hyping incremental ups and down would have been so much better used delving into the specific elements of the legislation.

Political reporters also love the narrative of Biden overreaching. This is partly so they can feel superior and above the fray, and partly because if it weren’t overreach, they’d have to reckon with their own abysmal failure to convey the need for transformative legislation over the years.

Both the news and opinion sides of the New York Times responded gleefully to what they considered vindication from the off-year election results that Biden was trying to go too far too fast.

Meanwhile, the corporate media has been complete suckers for inflation scare stories. By publishing articles like “Poll: Voters’ doubts rising about Biden’s health, mental fitness,” in Politico, they literally broadcast Republican talking points that have essentially no basis in fact.

It turns out that, contrary to my initial suspicion, Politico had polled on that question at least once before – in October 2020, when they asked it of both Trump and Biden.

The fact that 52 percent of those polled felt Trump was not mentally fit on the eve of his reelection bid, however, never made it into a news story, not to mention a headline.

The only legitimate news story to come out of the fact that 48 percent of those polled (up from 34 percent a year ago) say they find Biden mentally unfit would have been one about the effectiveness of the Republican disinformation machine.

Even Wins are Losses

When Biden wins an undeniable victory, our top newsrooms qualify it, and it’s a one-day story — if that. Do you remember much about how Biden, less than two months into his presidency, signed the American Rescue Plan, a nearly $2 trillion economic stimulus and relief bill? I thought not.

When the House on Friday passed what would be the single biggest government investment in America in more than a generation, the lead New York Times story said it only won “narrowly” and with the help of “legislative legerdemain.”

The Times even put a negative spin on a surprisingly optimistic report from the Congressional Budget Office on Thursday about the investment bill. The Washington Post correctly noted that it was cause for Democratic rejoicing; Post opinion columnist Paul Waldman wrote about how the CBO concluded it would increase the deficit by $16 billion a year, which, “[i]n the scope of the federal budget” is “a tiny amount.” The New York Times went with the headline “Social Policy Bill Will Add to Deficit, C.B.O. Says,” and called its determination “at odds with Mr. Biden’s pledge to fully pay for the $1.85 trillion legislation.”

Indeed, for much of the political press, Biden’s wins are just harbingers of loss — as exemplified by the already classic “Biden Got His Bipartisan Win. Now, Reality Sets In.” headline in the New York Times and “Americans aren’t feeling relief from Biden’s big Washington victory,” from CNN. CNN’s Stephen Collinson perfectly captured the vacuousness and meaninglessness of the coverage in this stunning paragraph:

As the White House struggles to pitch President Joe Biden’s big infrastructure win — a bipartisan law that may actually deserve the over-used description “historic” — ahead of next year’s midterms, its political salesmanship is already coming under fire. But the forces assailing Biden’s presidency, the obstacles thrown up by a once-in-a-lifetime pandemic, and the weight of his own missteps cut far deeper than anything a public relations blitz can fix.

New York Times opinion columnist Frank Bruni subtweeted his news colleagues earlier this week, noting Biden’s considerable successes and concluding that “cynicism is off base. While it pantomimes sophistication, it reeks of simple-mindedness.”

The single most telling indicator of the political media’s cluelessness is its own expression  of surprise about polls showing how little people seem to know about the bills and, alternately, how much they support them — even as Biden’s approval rating plummets.

This should trouble political journalists, because the obvious answer is massive media failure. But I see no sign that they are troubled.

She hawked it on Twitter as a story about how Biden voters “don’t think he’s doing enough — and they’re ready to jump ship in 2022.”

I'm also curious if ABC followed up with this economically struggling voter and asked him if he had heard Biden has been fighting for expanding Medicare & lowering prescription drug prices, both policies that are opposed by the Republicans this voter plans to support. pic.twitter.com/z7mtgqxCdw

The Atlantic’s David Graham on Friday offered up “Six Theories of Joe Biden’s Crumbling Popularity” – including “gravity,” Afghanistan, and “Democrats in disarray.” Missing was any acknowledgment of the media’s role.

I strongly suspect that Biden’s low approval ratings have a lot to do with three media failures.

One is the coverage of the Afghanistan pullout, especially by the visual media, that overhyped the tragic elements of the withdrawal and made Biden look like a loser, when history will record the ending of the Forever Wars as a huge win for the United States and the world.

Another is the corporate media’s predisposition to conservative economic framing. Congratulations here go to Pete Peterson, the late investment banker who spent his fortune making it so. Political reporters are way more suspicious of spending than they are of underfunding, and overly susceptible to moral panic over inflation.

And the third is that they prefer a simple, dramatic story to a complicated one. To that extent, to them,  Biden is a letdown. 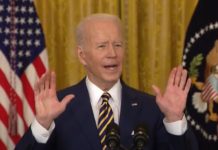 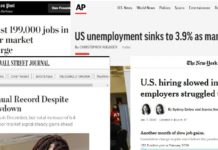 Which newsrooms are trying to make the economy look bad? 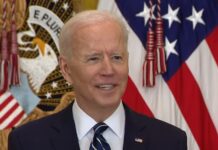