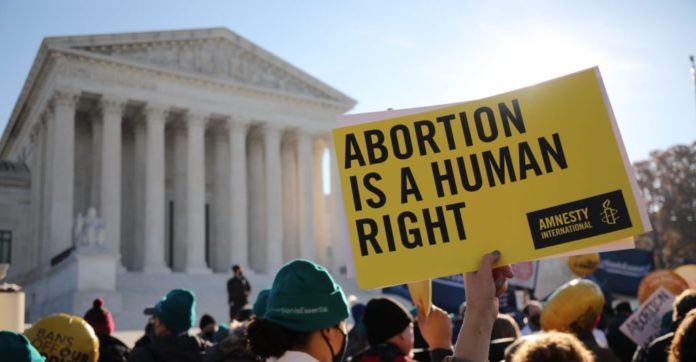 I worry that when the Supreme Court eliminates the constitutional right to abortion, which at this point seems inevitable, the corporate media will underreact – just like it did to Donald Trump winning the 2016 election and trying to steal the one in 2020.

Those two events took establishment journalists by surprise (amazingly enough). So they kept on covering day-to-day happenings like everything was normal. They sounded no alarms. They refused to abandon a neutral, above-the-fray tone, even when governing gave way to chaos and an election was nearly overturned.

But retracting 50 years of abortion rights – even if couched in the language of compromise — would be a considerably more immense and concrete shock, both politically and socially.

And this time there’s no excuse for journalists not to be prepared. They should start pre-writing their obituaries for abortion rights now, so they don’t understate the significance in the rush of a deadline.

When it happens, they will need to recognize that in dozens of states, the government will immediately begin seizing control over women’s bodies.

They will need to recognize that it is deeply abnormal that six extremist justices can destroy half a century of progress for women’s rights, health care, and justice.

They will need to recognize that the justices have set the clock back to a time of dangerous back-alley abortions, unwanted children, devastated lives, stymied dreams, and increased poverty.

They will need to acknowledge that the burden will, as it always is, be greater on the poor and people of color.

They will need to remind people that this would never have happened if Mitch McConnell hadn’t shockingly blocked confirmation hearings for Barack Obama’s nominee for the court; if he hadn’t hypocritically rushed through a nomination that should have been Joe Biden’s; and if the FBI had not left hundreds of tips alleging sexual assault and harassment by Brett Kavanaugh uninvestigated.

They will need to recall that the country’s slow march to progress has been based on expanding human rights, not rescinding them.

They will need to call attention to the unsurprising unmasking of what abortion rights supporters had long considered flat-out lies during confirmation hearings, especially by the three Trump appointees.

They will need to distinguish between the principled opposition to abortion by those who truly believe life begins at conception; the shameless political pandering to that group; and the twisted misogyny that wants to see women punished for having sex, even when they are rape victims.

They will need to recognize that the idea of a white Christian authoritarian government will no longer be abstract, it will be upon us. And should Republicans win Congress and the White House, and give no indication they would ever relinquish power, there will be no coming back.

AP, NPR and others suddenly sounding all tough on Trump, but it’s too little and too late