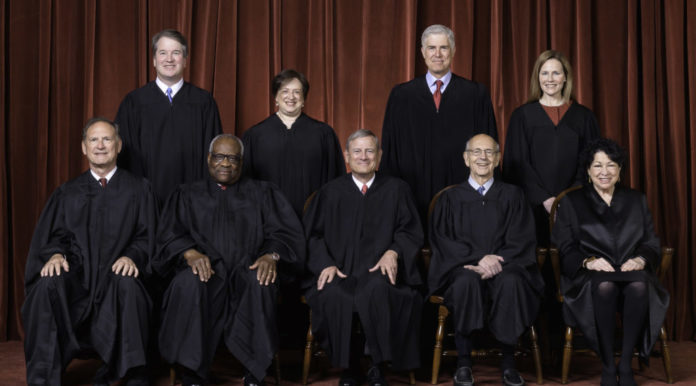 President Biden’s intent to nominate a Black woman to fill Justice Stephen Breyer’s emptying seat on the Supreme Court has freaked out right-wing media, sending the likes of Tucker Carlson and Larry Kudlow into torrential rants of racist and misogynistic froth and whiny white grievance.

That’s not really so shocking. It’s laughable, ironic, and pathetic, given how 108 of the 115 people who have served on the Court have been white guys, and how overdue such a nomination is.

But what is shocking is that the New York Times treated as a serious, debatable proposition the view that Black women have been overrepresented in Biden’s judicial nominations.

The Times article by Michael D. Shear and Charlie Savage focused on how Biden’s promise “underscores how much Black women have struggled to become part of a very small pool of elite judges in the nation’s higher federal courts.”

But Shear and Savage then went on to respectfully relate the argument that there is something off about Biden’s attempt to fix that. They wrote:

Half of Mr. Biden’s first 16 nominees for federal appeals courts have been Black women — as many as all previous presidents combined had appointed. That emphasis has attracted scrutiny from across the ideological spectrum.

And to illustrate this “scrutiny from across the ideological spectrum,” they quoted a seriously compromised Republican operative:

But conservatives like the National Review legal commentator Ed Whelan have pointed out that the number of Black women Mr. Biden has nominated is strikingly disproportionate to the available pool of Black women with law degrees.

Steve Vladeck, the prolific and perspicacious University of Texas law professor, was quick off the mark Wednesday night to call out the Times:

The casual insinuation that this says more about the pool of potential #SCOTUS nominees than it does about the broader lack of diversity in the legal profession may not be beneath the speaker, but it sure ought to have been beneath the New York Times to uncritically publish. pic.twitter.com/RN6CYMSoIU

Others on Twitter also criticized the Times for quoting Whelan — and compounding their mistake by not explaining who he is.

Whelan, after all, is the guy who was forced to apologize and take a leave from the think tank he runs after he peddled a conspiracy theory on social media as part of the PR campaign to cast doubt on the veracity of a sexual assault allegation against then-Supreme Court nominee Brett Kavanaugh.

By contrast to the Times, the Washington Post focused on how the appointment would be “a milestone in the country’s history.”

Seung Min Kim and Ann E. Marimow quoted Democratic Sen. Patty Murray saying “The court should reflect the diversity of our country, and it is unacceptable that we have never in our nation’s history had a Black woman sit on the Supreme Court of the United States.”

He mocked Biden for not picking a Pacific Islander or a trans woman instead. And in a classic example of projection, Carlson said

You almost got the impression that Joe Biden believes all Black women are the same. They’re identical.

Not much later, he illustrated my point exactly:

So you have to wonder at this point, since we are going by skin color and gender, why Joe Biden is ignoring the obvious choice. Why doesn’t bite and strike a real blow for equity and just nominate Bridget Floyd, George Floyd’s sister.

He put this photo up on the screen.

Larry Kudlow was outraged. “I am offended by President Biden’s woke promise to appoint an African-American female,” he said.

He had an alternative proposition: “that Joe Biden would consider the most eminently qualified person, including white people. That’s right, white people.”

This was followed by a sound bite from Martin Luther King Jr.’s “I Have a Dream” speech.

Instead, in Biden-world, we will end racism by being racist. We will end prejudice by being prejudiced. We will end divisions by being divisive. I think it’s a travesty. I think it disqualifies Biden from being president. I think it’s much worse than big government socialist spending, or tax hikes, or central planning regulators, or ending fossil fuels, or open borders.

Sean Hannity went on the attack.

And Maria Bartiromo seriously insisted that “speculation” was “rising” that Biden would pick Kamala Harris and maybe nominate Hillary Clinton as vice president. It is, but it’s nuts.

Lucky for us, we have people like Elie Mystal and Nicole Hannah-Jones to put the racist, sexist right-wing meltdown into context.

They’ve been on a roll on Twitter and TV. A tiny sample:

The convos about Black women & the Supreme Court is just another demonstration of how the white is always silent. Generations where white and male was the primary qualification. 84 percent of the judges Trump appointed were white, but because he didn't say white, it's cool. pic.twitter.com/nVgIf3PW05

Anyway, this is the white man play. It's always the play. Diminish the intelligence and accomplishments of women of color. Complain about identity politics. Forget that they rallied around a buffoon who likes beer not five years ago because he checked all the [w]hite boxes.

"They can miss me with their fake outrage over identity politics now, when they're ones who have been practicing it for years." @ElieNYC on Republican criticism of President Joe Biden's vow to nominate a Black woman to the Supreme Court to replace Justice Stephen Breyer. pic.twitter.com/Vtruy7S8Jt

Amazing how fast all the people who suddenly believe that the most qualified person for the Supreme Court can’t possibly be a Black woman forget about this. https://t.co/1dOM2HH6Fl

I worry about how this story will be reported on by our corporate media because it touches on some issues that it typically avoids, elides, or screws up.

This nomination ought to spur all sorts of important discussions – about racial justice in general, but also specifically about the need for redress, and the notion that Biden is trying to fix something that remains broken.

I mean, you sometimes do need to redress historical wrongs. You do need to acknowledge the past, and how it continues to influence the present. Those are not crazy ideas.

But our elite newsrooms just aren’t comfortable going there. You could see that in their resistance to addressing the actual substance of critical race theory – while gleefully reporting about how clever it is for Republicans to demonize it.

The substance of critical race theory, as it happens, is highly relevant to the nomination of a Black woman justice, as Nikole Hannah-Jones explained:

This is literally why CRT exists. A system that from 1790 to 1967 made being white and male an explicit qualification, where a Black woman has never served even as the first BW passed the bar in 1872, but it's considered discriminatory to explicitly address that history.

Similarly, coverage of the Supreme Court’s decision to reopen the debate about affirmative action has avoided the central issue of racial justice, focusing instead on whether “diversity” justifies giving some preferences to under-represented groups.

Robert Barnes and Nick Anderson of the Washington Post were far from alone in framing the issue as one of “whether universities may consider the race of applicants when trying to build diverse student bodies.”

That is indeed what a lot of the arguing is about, but it’s important to remember that affirmative action (as I wrote in a 1998 primer for the Washington Post) was born of the civil rights movement, and is the nation’s most ambitious attempt to redress its long history of racial and sexual discrimination.

It’s still needed because the playing field is not level yet. Granting modest advantages to minorities and women is more than fair, given hundreds of years of discrimination that benefited whites and men.

But our big newsrooms don’t like to address the playing field issue anymore – something most vividly illustrated by the one exception to the rule: the epic 2014 Atlantic essay by Ta-Nehisi Coates, making the case for reparations.

“America was built on the preferential treatment of white people—395 years of it. Vaguely endorsing a cuddly, feel-good diversity does very little to redress this,” Coates wrote.