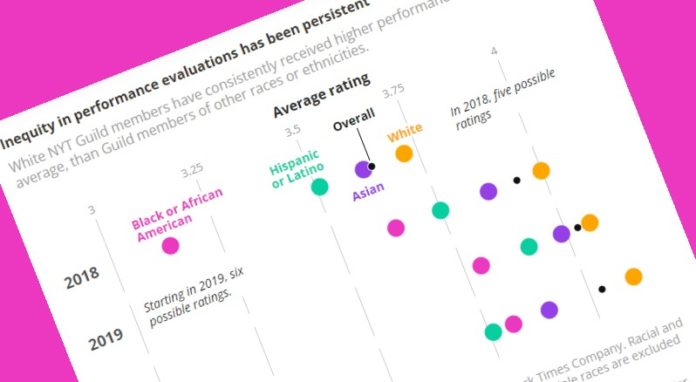 My take on the New York Times newsroom is that it is increasingly riven.

On one side: Top management and the old guard, who continue to enforce a dominant but senescent white culture of both-sidesism and comfort with the status quo.

On the other side: Younger and more diverse staffers, along with some older and whiter supporters, whose lived experiences tell them that dramatic societal change is necessary, and who believe their calling is to the truth even if the truth is one-sided.

So new evidence out today that New York Times management doesn’t just underappreciate diversity in its newsroom, but actively devalues it, didn’t surprise me at all.

Maybe a little more surprising was learning that management’s response to persistent concerns about racial disparities in performance ratings was to hire a consultant who covered up those disparities with bad statistical methods.

The new evidence is from an analysis by Times journalists in the NewsGuild of New York, the union that represents the Times newsroom. The Guild, which includes vocal supporters of both sides of the “both-sides” debate, is currently negotiating a new contract with Times executives. Its new report concluded that the Times “has for years given significantly lower ratings to employees of color.”

The Guild “found that in 2021, being Hispanic reduced the odds of receiving a high score by about 60 percent, and being Black cut the chances of high scores by nearly 50 percent. Asians were also less likely than white employees to get high scores. In 2020, zero Black employees received the highest rating, while white employees accounted for more than 90 percent of the roughly 50 people who received the top score.”

Those ratings send a message. “Guild members who believed their contributions weren’t fairly rated in the review process have said they feel demoralized and alienated — a pernicious outcome as The Times attempts to recruit and retain a diverse workforce.”

It is not clear whether the racial imbalance is a result of problems in the performance review system itself or whether that system is simply revealing barriers to success for employees of color at the company.

But I find it hard to believe that it’s a coincidence.

What I see is plenty of evidence that top Times managers, like top managers at so many other news organizations, see increased diversity as a potential threat to their values.

This explains their wild over-reaction to what has been pejoratively labeled “wokeism”, but is really an attempt to treat everyone with the same respect accorded to the white cis majority. The undue obsession with “cancel culture” can be seen in the newsroom, where at least one marquee reporter (Michael Powell) is wholly devoted to writing “woke panic” scare stories, and on the opinion side, where at least two columnists (Pamela Paul and John McWhorter) are doing likewise.

Indeed, according to the New York Times editorial board, it is a “fundamental right” not to be “shamed or shunned” no matter what you stand for.

The Times’s resistance to change has long been evident in statements from Dean Baquet, who recently stepped down as executive editor (only to be replaced by his loyal deputy, Joe Kahn.)

Baquet said in a New Yorker interview in February that he values “younger millennials” – but only if, in return, they adopt his notion of journalistic objectivity:

What we bring to the table is the power that they get when they produce a New York Times story. And I think we just got to do some trading. You get the power, but you’ve got to accept that we are what we are, which is an independent institution, independent of party and ideology.

He contrasted the “demands” of  the “next generation of Black journalists” to his duty to “make sure that the New York Times is a fair-minded institution,” on the other. “I have to protect the place. I have to make it better, but also sometimes resist the things that they want to change because I think those things are important to the core,” he said.

In a 2020 interview, Baquet responded dismissively to younger, Black reporter Wesley Lowery’s seminal Times op-ed calling for greater “moral clarity” — for instance by no longer “reflexively hiding behind euphemisms that obfuscate the truth.”

“I have to protect the place,” Baquet said. “I have to make it better, but also sometimes resist the things that they want to change because I think those things are important to the core.”

The Times is hardly alone. As I wrote in my 2019 primer on journalism and race, the gaze of all our elite American newsrooms remains intractably white and male, dooming their ability to see how race and racism are central to the political divide in our country.

A spokeswoman for the Times told NPR’s David Folkenflik that the company has taken the Guild’s concerns seriously, but that it evaluated similar objections a year ago and found no bias.

The Guild raised serious doubts about that evaluation, however. The Times refused to hand over a copy. And one of the outside experts to whom the Guild described the consultant’s statistical approach replied, “That’s what you would do if you want to obliterate signal.”

Will the younger and more diverse staffers eventually succeed the current generation of managers? I certainly hope so. But it won’t happen if they get driven out by demoralizing performance evaluations, smaller raises, and fewer promotions.

See more of my New York Times coverage! They’ll never hire another Public Editor. In the meantime, you’ve got me, and Press Watch. Please consider making a tax-deductible contribution.