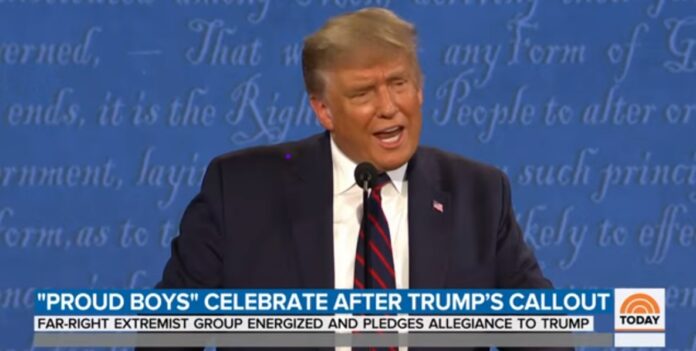 You could see it happen in real time. Almost all the major news organizations I was watching started the evening with lame, both-sides headlines (“Sharp Personal Attacks and Name Calling in First Presidential Debate,” at the New York Times, for instance.) But after a few hours, the tone changed in most places.

Finally, Trump had gone too far for even timid, risk-averse editors to cover for him anymore, and the headlines began to reflect the dismal, one-sided reality of what had just happened.

For the Washington Post, that meant: “Trump incessantly interrupts and insults Biden as they spar in acrimonious first debate.”

For the New York Times, that meant: “With Cross Talk, Lies and Mockery, Trump Tramples Decorum in Debate With Biden.” And, on Wednesday —  very significantly — “Tuesday’s Debate Made Clear the Gravest Threat to the Election: The President Himself.”

One notable exception was the Associated Press, which despite some blistering sidebars, maintained a gutless and shameless passive-voiced neutrality in its mainbar. (I really want to know who was in charge over there.)

But even the best coverage didn’t make a connection that I think is hugely important.

There was a lot written about Trump’s style: bellicose, hysterical, unstoppable, rule-breaking, trampling over anyone in his way.

And there was a lot written about the racist, anti-democratic substance: telling white supremacists to “stand by”; ordering his supporter to “go into the polls”; predicting a fraudulent election; screaming about “law and order.”

What the coverage failed to capture, however, was how the style and the substance relate.

Trump was both telling his base what to do and showing them how to act. He was telling them to be prepared to fight – and to break the rules. For him, and like him.

And seen together, there’s really only one word for what he was preaching: it’s fascism. It had nothing to do with winning an election, and everything to do with stealing it.

Let’s go to the transcript.

Consider when Chris Wallace asked him  “are you willing tonight to condemn white supremacists and militia group and to say that they need to stand down and not add to the violence?“

Trump eventually responded: “Proud Boys, stand back and stand by. But I’ll tell you what somebody’s got to do something about Antifa and the left because this is not a right wing problem this is a left wing.”

Wallace asked: “Will you urge your supporters to stay calm during this extended period, not to engage in any civil unrest? And will you pledge tonight that you will not declare victory until the election has been independently certified?”

Trump replied:  “I’m urging my supporters to go in to the polls and watch very carefully, because that’s what has to happen. I am urging them to do it.” And, he said, “if I see tens of thousands of ballots being manipulated, I can’t go along with that.”

Trump also claimed the loyalty of the military (inaccurately) and law enforcement (more accurately): “We just got the support of 250 military leaders and generals, total support. Law enforcement, almost every law enforcement group in the United States. I have Florida. I have Texas. I have Ohio. I have every… Excuse me, Portland, the sheriff just came out today and he said, ‘I support President Trump.’” (The sheriff, as it happened, soon tweeted: “I have never supported Donald Trump and will never support him.”)

And he bragged about the extrajudicial execution of antifa supporter Michael Reinoehl in early September, who was shot without warning by a ragtag federal task force. “I sent in the U.S. Marshals to get the killer of a young man in the middle of the street and they shot him,” Trump said. “For three days Portland didn’t do anything. I sent in the U.S. Marshals they took care of business.”

And all the time he was lying and interrupting, breaking the ground rules his campaign had agreed to.

Esquire politics blogger and veteran truth-teller Charles P. Pierce got it exactly right when he wrote that “the only story from Tuesday night” was “the great, looming, consistent threat emerging from whatever the hell that event became.” He explained:

It was pure fascism, right down to the set of his chin that he stole from Mussolini, but it was fascism at the behest of a career failure who was sending out a call for anyone else with a sense of failure and a long gun..

I wrote last week that some leaders of our top newsrooms are finally openly acknowledging that Trump presents a grave danger to our democracy. The New York Times took another major step in that direction on Wednesday, unleashing a David E. Sanger analysis of the debate with this uncompromising declaration:

President Trump’s angry insistence in the last minutes of Tuesday’s debate that there was no way the presidential election could be conducted without fraud amounted to an extraordinary declaration by a sitting American president that he would try to throw any outcome into the courts, Congress or the streets if he was not re-elected.

His comments came after four years of debate about the possibility of foreign interference in the 2020 election and how to counter such disruptions. But they were a stark reminder that the most direct threat to the electoral process now comes from the president of the United States himself.

But while Sanger noted that Trump importuning his supporters to go into the polls “seemed to be code words for a campaign of voter intimidation,” overall he gave short shrift to the lawlessness and violence Trump is so clearly calling for.

Political analysts, shocked to their bones, are calling this a debacle for Trump, pointing out that his hectoring, bullying, and rule-breaking didn’t win over any converts, and muddied his message.

But what if the rule-breaking was the message? Then Trump may have made progress — not in winning the election, but in taking it by force.