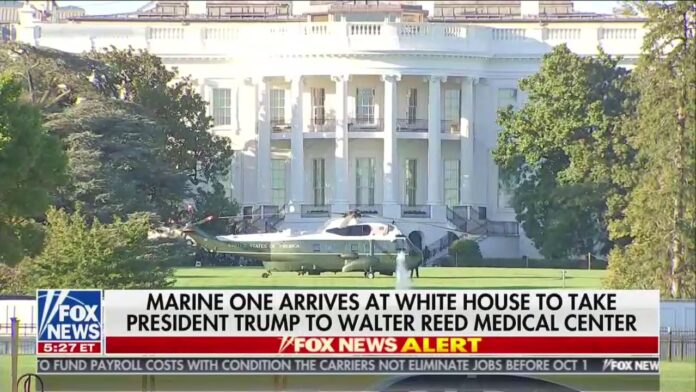 Political journalists covering the highly dramatic news that Donald Trump has been sickened by Covid-19 have been engaged in a public search for the right tone.

They are understandably intent that their giddiness about a huge story not appear to be gloating. As a result, you are hearing and reading in their reports a lot of sympathy, shock, and concern – amid a whole lot of unanswered questions.

But it’s not gloating to point out that this could have been avoided if Trump had taken the obvious and proper precautions that he petulantly and ignorantly chose not to.

The entirely self-inflicted nature of this tragedy is one of its central elements, as is the way Trump’s incredible irresponsibility and arrogance was mimicked by his supporters, significantly exacerbating the pandemic. It’s a hugely important element of what’s going on here.

“This has been the issue all along,” Rimoin said. “All of the public health experts including those people close to Donald Trump, all on the White House Task Force, the CDC, Dr. Fauci, have all said how important it is to wear a mask. How important social distancing is. And how critical it is to be able to stop the spread of the virus. And unfortunately, the Trump team has not done a good job of doing this or setting an example.”

Also in the early hours, Dr. Vin Gupta told MSNBC: “This was avoidable. This did not have to happen if they were practicing the proper procedures and not going to these rallies and having these chaotic events, where, of course, airborne exposure was going to happen even if it was in an outdoor setting. No masking, no distancing — what did they expect was going to happen?”

I have always trusted science and medical reporters over political reporters to get pandemic news  straight and in its proper context. The great Helen Branswell led off her initial story for the health news site Stat this way:

President Donald Trump, who has frequently dismissed the significance of the Covid-19 pandemic and rarely wears masks in public, has contracted the coronavirus and is now in quarantine, he announced early Friday morning on Twitter.

Her Stat colleague Lev Facher wrote about how obvious it was all along that Trump’s only real precaution — the frequent use of diagnostic tests not widely available to others  – wasn’t nearly enough:

To some public health experts, the news came as little surprise. Many have long warned that testing is inadequate as a preventive measure without other baseline mitigation strategies.

“If you told me that somebody who was only testing, not wearing their mask, not distancing, and not taking every other precautionary measure tested positive,” said Saskia Popescu, a University of Arizona epidemiology professor and biodefense expert, “I would say: No shit, Sherlock.”

The initial reporting from the political press corps didn’t focus on how Trump did this to himself – but was pretty blunt about how politically embarrassing it was after all his rhetoric minimizing the virus.

The first paragraph of Josh Dawsey and Colby Itkowitz’s breaking news story for the Washington Post described Trump’s announcement as coming “after months in which he has often played down a pandemic that has killed more than 205,000 Americans and sickened millions more.”

Peter Baker and Maggie Haberman were admirably direct in their New York Times story, writing that even if Trump “does not become seriously ill, the positive test could prove devastating to his political fortunes given his months of diminishing the seriousness of the pandemic even as the virus was still ravaging the country and killing about 1,000 more Americans every day.”

The second sentence of the first story by Zeke Miller and Jill Colvin moving across the AP wire noted: “The positive test comes a month until the election and after the president has spent the year largely downplaying the threat of the virus.”

But as time went on, the AP backed away from that construction, replacing it with a much less useful clause about how “the virus that has killed more than 205,000 Americans spread to the highest reaches of the U.S. government just a month before the presidential election.”

In fact, I’m seeing less context rather than more as the coverage continues —  and the plot thickens. That’s understandable to some extent, but it’s important not to lose sight of the bigger picture.

This happened for a reason – and it was a very bad reason.

As Jeet Heer wrote in the Nation: “Now is not the time to be euphemistic about Trump’s recklessness.” He wrote:

A president contracting a disease thanks in large part to his own rashness is a political fact as well as a personal one. We can express, if we are so inclined, sympathy on a human level for Trump, but his thoughtlessness has wider consequences that need to be called out.

The Los Angeles Times editorial board described Trump as a “reckless president whose irresponsibility has endangered not only himself and his family but the stability of the country by throwing the executive branch into chaos.”

The argument against the “thoughts and prayers” response to the tragedy was made with particular eloquence by author Naomi Klein on Democracy Now. “I really think we should see Trump getting COVID as the epidemiological equivalent of a mass shooting where the shooter opens fire on the crowd, and then turns the gun on himself,” she said. “This is not a tragic accident — it is a crime scene, and should be treated as such.”

We need more reporting like the Guardian article by David Smith, who wrote that after so many ridiculous Trumpian assertions of invincibility, “the chickens have come home to roost, just as they did for the similarly cavalier British prime minister, Boris Johnson, and the Brazilian president, Jair Bolsonaro.”

And we need more brave truth-telling like this from CNN’s Jake Tapper, on Friday afternoon: “Make no mistake, this was not just reckless behavior, this was a demonstration of a wanton disregard for human life. President Trump, now in quarantine, has become a symbol of his own failures.”

But I fear that, especially if Trump’s condition worsens, the attention will shift so entirely to the coverage of incremental developments and the political fallout that the American public will be deprived of this crucial context: that he brought it upon himself.