You’ve heard it a million times from defensive big-media reporters and editors as they refuse to engage their critics: “If I’m being attacked from both sides, that means I’m doing it right.”

It’s a pathetic excuse for not addressing the substance of any complaint.

And, as many media critics have pointed out over the years, it’s at least as likely that they’re being attacked from both sides because they’re doing it wrong.

That said, being attacked from both sides is one thing. Being almost universally loathed is quite another. If pretty much everybody thinks you’re doing it wrong, it’s hard to argue that you’re doing it right.

If nearly everybody thinks that not only are you doing it wrong – but you’re actually a threat to democracy – then I would argue you’re doing it tragically wrong.

A recent New York Times poll has been the talk of Washington this week because it suggested that most Americans care more about gas prices than about democracy and are therefore going to vote Republican. (Yes, I realize that makes no sense. I blame the media.)

But the pollsters also asked respondents whether they thought American democracy was under threat – and if so, which national institutions they felt posed a major threat, a minor threat, or no threat at all.

Of the 71 percent of likely voters who said yes, democracy is under threat, fully 59 percent said “the mainstream media” posed a major threat.

Deep cut from our latest poll: of all the potential threats to democracy, 'mainstream media' had the highest share saying it was a threat. That's because most Republicans (80%) and a relatively high % of Democrats (38%) say its a major threat to democracy https://t.co/A31I9hO5J1 pic.twitter.com/DJiP9esCnk

That’s more than picked any other option – including Donald Trump, Joe Biden, the Republican Party, the Democratic Party, the Supreme Court,  the federal government, and the Electoral College.

That’s right, the biggest threat to democracy comes from the mainstream media.

Now this poll result, even more than most, should be taken with a big grain of salt. One of the major takeaways from the poll was totally nuts; 59 percent of 71 percent is 42 percent – so, technically speaking, a majority of Americans don’t necessarily think the mainstream media is a major threat to democracy; People can easily have wildly different views of what “threatens democracy” means; Trump voters were three times more likely than Biden voters to consider the media a major threat to democracy, presumably for dramatically different reasons.

But the biggest problem with all of these polls on the media is the pollsters’ refusal to distinguish between the different forms of media.

If you are a reality-based person and you consider Fox “News” as a major part of the mainstream news media, then of course you think the news media is a major threat democracy.

Contrarily, if you are a MAGA/Qanon type who happily wallows in disinformation and racist vitriol, then you think truth-tellers are a menace to society. And you’ve been hearing the leaders you trust say so, endlessly, over the last six-plus years.

But it is at least partly the mainstream media’s fault that it has failed to effectively champion the truth, allowing misinformation to take such a hold.

And I suspect a considerable fraction of the reality-based community is disgusted with the mushy both-sidesism they get from places like the New York Times, and more generally with the profound failure of journalism as a whole to evangelize the truth to the deluded. If you asked me, yeah, I’d say the New York Times and its ilk constitute a major threat to democracy, because they have abandoned their natural role as its great defenders.

Fox, however, is uniquely problematic, both in terms of its affect on public opinion and how including it as part of the “media” makes public opinion about the media incoherent. We desperately need to stop calling Fox  news, and stop categorizing it as news. It’s the opposite of news.

As a major vector of disinformation, propaganda and violent Christian nationalism, it’s a news story, not news. Indeed, the most important question pollsters can ask these days is: “Where do you get your news?” And then they should let people see how that makes all the difference.

To its credit, the NYT/Siena poll did ask “what single news source do you turn to most often?” (Fox News was No. 1, at 19 percent. The only others that came even close were the network news shows, collectively, and “social media”.)

But the Times doesn’t let us see how that question affects other responses. That’s not one of the official “crosstabs.” It should be. (I’ve asked.)

The public’s disgust with the “mainstream news” or “mass media” – whatever that is — is obviously nothing new.

Gallup recently found that only 34 percent of Americans trust in the mass media – defined as “newspapers, TV and radio“ — to report the news “fully, accurately and fairly”. It was even lower – 32 percent — during the 2016 presidential campaign.

Gallup did note that it was “the first time that the percentage of Americans with no trust at all in the media is higher than the percentage with a great deal or a fair amount combined.”

Meanwhile, however, our newsroom leaders will continue to do what they do, satisfied that if “both sides” are unhappy, they must be hitting the sweet spot.

How clueless are they? Consider what former New York Times executive editor Dean Baquet told the Guardian’s Ed Pilkington, just days after Clinton lost the election to Trump: “We didn’t cover Donald Trump any more aggressively than we covered Hillary Clinton. People forget that we broke the story of Clinton’s emails. If both sides think you were tough on them, maybe that means you were fair.”

He had it all backwards, and they still do. 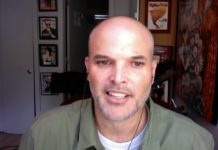