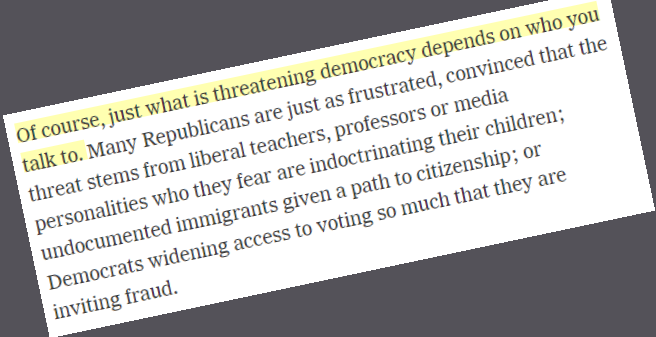 In a front-page story on Sunday ostensibly about how “fears of democracy” are playing out in real-world Wisconsin, New York Times reporter Jonathan Weisman instead equated legitimate fears with illegitimate ones, and used man-on-the-street interviews to make a mockery of the deep, abiding concerns that many Americans have about the future of their country.

That he could have written this paragraph – and that who-knows-how-many layers of editors could have approved it – is the ultimate testament to the New York Times’s grotesquely warped and failed approach to covering this critical moment in our history:

Of course, just what is threatening democracy depends on who you talk to. Many Republicans are just as frustrated, convinced that the threat stems from liberal teachers, professors or media personalities who they fear are indoctrinating their children; undocumented immigrants given a path to citizenship; or Democrats widening access to voting so much that they are inviting fraud.

Let’s be clear. Saying that something factual “depends on who you talk to” is not accurate.

Yes, as NYU professor Jay Rosen noted, it’s a tried and true device reporters use to introduce both-sidesism. And it works just fine when it’s a matter of opinion. “Whether the most morally corrupt team in baseball is the Astros or the Phillies depends on who you talk to” is a perfectly reasonable statement.

But what Weisman was doing – knowingly, with a smirk – was suggesting it’s a toss-up between those terrified by the very real possibility of the Republican Party seizing absolute power, on the one hand, and right-wing conspiracy theorists who see brown people and socialist elites as scary, on the other.

He also used the “depends on who you ask” structure as an excuse to echo and essentially validate right-wing lunacy. What they call “indoctrination” is trying to teach empathy. Immigrants are not replacing white voters. And the idea that “widening access to voting” is something that “invites fraud” is utterly specious, but Weisman make the assertion in his own voice and doesn’t dispute it.

You can imagine the contempt dripping from Weisman’s lips, the implied italics, as he wrote: “Wisconsin would seem like a state where concerns over democracy feel pressing.”

He briefly acknowledged that Wisconsin, “perhaps more than any other state, is suffering through the erosion of democratic ideals already.” For instance: “Though virtually every elected statewide officer here is a Democrat, extreme gerrymandering of state legislative maps has given Republicans near supermajorities in the State Senate and House.”

But in another classic of mealy-mouthed both-sidesing, Weisman set up the second half of his article – based on, presumably, a handful of interviews during a brief visit to Lacrosse – with this paragraph:

Indeed, ask voters exactly what is threatening democracy and the answers are as varied as the individuals who formulate them.

Then he mocked legitimate democracy fears by choosing as his first man-on-the-street interview a bicycle and pedestrian safety consultant named Peter Flucke, who Weisman wrote sees the “unraveling of democratic control.. [n]ot in the grainy images of lawlessness seen in countless attack ads against Democrats, but in rising death tolls in Wisconsin’s crosswalks and bike lanes.”

Weisman acknowledges that Flucke intends to vote Democratic, “though not because of all this democracy talk.” Rather, Weisman writes, it’s because Flucke said “he is most worried about his two daughters losing their right to choose an abortion.”

(I called Flucke, by the way, just to see if Weisman captured his views correctly. Flucke told me he does indeed consider crosswalk safety to be his top political issue. But, he said, the death toll in Wisconsin is actually holding steady, not rising, and “what I actually said is women’s health rights, not abortion.”)

As usual, when a story is this skewed, this grotesque, I can’t just blame the author.

Assigning Weisman to write this story was, in itself, an extraordinary act of cynicism on the part of New York Times editors.

Weisman is not one of those reporters who can be accused of having a “view from nowhere” – the alleged detachment that journalists claim when refusing to take sides on a political issue. Rather, he has a long and well-documented track record of toxicity toward Democrats and minorities. He consistently makes elitist, clueless and simply wrong assumptions. And he is perhaps the most pompous writer at the Times, which is saying a lot.

The Times has done some strong reporting on the real, justified fears of a slide into authoritarianism. But, as I wrote in June, the “Democracy Team” is outnumbered and outgunned by the likes of Weisman, who make up Team Impunity.

They’re the ones who turn their own failure — as the tone-setters of American political journalism – to properly alarm the public about what may to come into clickbait stories about how apathetic and polarized people are.

There’s simply no excuse for assigning and publishing articles that split the difference on reality – certainly not when a referendum is coming up.

Weisman’s not going to change. But does the new editor of the Times, Joe Kahn, really want his legacy defined by this extraordinary failure to rise to the challenge of the moment? I fear he’s fine with it.