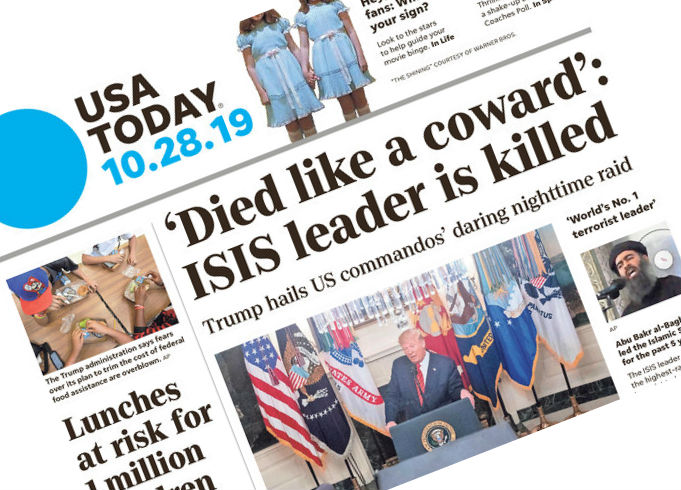 How likely is it that we will soon establish that Donald Trump flat-out lied when he gloated on Sunday morning that ISIS leader Abu Bakr al-Baghdadi died “running into a dead-end tunnel, whimpering, crying, and screaming all the way”?

I suspect not long.

But most news consumers will be surprised.

That’s because they didn’t read or see any pushback against Trump’s comments – which, even if true, were manifestly sadistic, inappropriately taunting, and highly suggestive of some disturbing interpersonal dynamic.

Trump has a long history of lying about, well, almost everything. And as New York Times reporters Peter Baker, Eric Schmitt and Helene Cooper to their credit told readers fairly high up in their lead story, the video feeds Trump saw could not have detected any whimpering and no other officials independently confirmed Trump’s account.

Both the Times and the Washington Post also had an admirable number of accompanying stories delving into the unlikelihood of Trump’s account, its inflammatory nature, its crass stage management, its contrast with Obama’s tone, how his own Syria policy nearly undermined the raid, and so on.

But lead stories in the Post and the Associated Press were among those that were high on stenography and low to nonexistent on skepticism.

And what did low information voters hear?

The CBS Evening News followed the White House script, with the intro intoning “President Trump takes a victory lap,” and showing Trump saying “he died like a dog. He died like a coward.”

Correspondent David Martin offered yet more quotes from Trump, including the one about “whimpering, crying, and screaming all the way,” without an iota of skepticism.

And on the NBC Nightly News, foreign correspondent Richard Engel essentially let Trump narrate the whole story, although White House correspondent Hallie Jackson did offer up some back and forth on Trump’s decision to notify the Russian government, but not  congressional Democrats.

In short, the reports on the major broadcast networks were not substantially different in tone and content from what Fox News viewers saw and heard on Fox Report Weekend.

The likelihood that Trump lied ought to have been a major element in the coverage on Sunday in more outlets than just the Times.

Is there any evidence that Trump was singularly focused on Baghdadi, as he says he was?

And we’ve rarely seen Trump’s profound insecurity and sense of grievance so overtly displayed as it was on Sunday in his choice of language and his attempt to diminish the killing of bin Laden during Obama’s presidency.

Rolling Stone political writer Jamil Smith was a bit blunter on Twitter than one could reasonable ask from mainstream journalists. But he was also closer to reality:

Like so many men, Trump is incessantly trying to convince us that he has a big dick. His al-Baghdadi remarks flowed from his own sadism and sick masculinity, and they overshadowed a counterterrorism success. This was 25th Amendment stuff on display today. https://t.co/nHLfQZeGjr

The fact that sentences like this are still being written in the New York Times almost 20 years after 9/11 is so depressing. Does anyone actually believe the United States has the capacity to solve these problems? pic.twitter.com/EssxB0LlAk

One final note: In a rare example of clickbait headlines actually serving the public interest, CNN advertised a feeble analysis by Chris Cillizza as containing “The 41 most shocking lines” from Trump’s announcement (Cillizza himself could only bring himself to call them “uh, notable”) and NBC trumpeted a bunch of straight quotes with absolutely no commentary at all as “Fifteen stunning moments.” Which they were.

“David Zaslav, the company’s chief executive, has said that he wants a network for both Republicans and Democrats.”

A reminder that too many in my industry still seem to believe that there is a big GOP audience that *wants* facts or ‘straight news’. https://www.nytimes.com/2022/08/18/business/media/cnn-brian-stelter-reliable-sources.html

At the Aspen Times, I had a front row seat for corporate censors and thin-skinned billionaires stifling the free press. I wrote about it all for @TheAtlantic: https://www.theatlantic.com/ideas/archive/2022/08/aspen-times-newspaper-vladislav-doronin-billionaire-lawsuit/671180/

Incredible, in-depth reporting on Dan Price and his history of abuse by @KYWeise. "Price was a charismatic messenger in a moment of growing inequality, but the story he was telling in public didn’t add up." https://www.nytimes.com/2022/08/18/technology/dan-price-resign-social-media.html

@Will_Bunch @froomkin It's super concerning that Stelter, who consistently amplified Conservative people and opinions is out because he is considered 'left'.