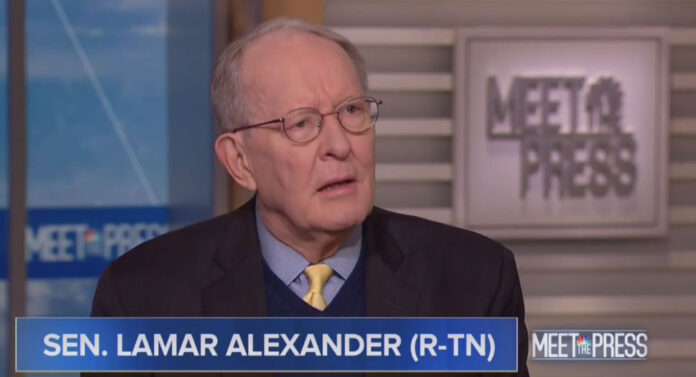 What message should the American public take from Donald Trump’s imminent acquittal by the Republican-majority Senate?

Our nation’s top political journalists are going to great lengths to avoid the obvious but very partisan-sounding answer to that question.

So we have Philip Rucker writing in the Washington Post that it will have “profound and long-term ramifications for America’s institutions and the balance of power between the executive and legislative branches, according to numerous historians and legal experts.”

We have Peter Baker writing in the New York Times that Democrats took their shot, and failed:

With the end of the impeachment trial now in sight and acquittal assured, a triumphant Mr. Trump emerges from the biggest test of his presidency emboldened, ready to claim exoneration and take his case of grievance, persecution and resentment to the campaign trail.

Baker adds that impeachment will be a “stain” on Trump’s record, but according to the polls, it’s a wash.

Republicans have decided it was OK.

But she distances herself from the obvious conclusion, attributing it to others:

To Democrats, who initiated the impeachment process in hopes of pulling at least a handful of moderate or retiring GOP lawmakers to their side, Republicans are sending the message that, when it comes to Trump, nothing matters. His grip on the party is complete.

Here’s what these reporters should have said, but couldn’t, because it just sounds too much like they’re taking sides.

The big takeaway from Trump’s impeachment is that he incontrovertibly abused his office and engaged in a coverup.

The bit takeaway from Trump’s acquittal is that Republicans cannot be trusted to hold members of their own party accountable.

The Constitution hasn’t changed, and the Constitutional limits to the executive branch will be no different on Thursday than they were 10 years ago – except when Republicans control the Senate.

But instead, reporters like Rucker try their damndest to bury the lede.

So, after declaiming the “profound and long-term ramifications,” Rucker explained that what the historians mean, more specifically, is that “the Senate is lowering the bar for permissible conduct for future presidents.”

There are a lot of quotes from Jon Meacham. Here’s a paragraph high up in Rucker’s story.

“It’s a dispiriting moment for an American system that in many ways was founded on the insight that, because humankind is frail and fallen and fallible, no one branch of government can have too much power,” said Jon Meacham, an American historian and author. “The president’s party, instead of being a check on an individual’s impulses and ambitions, has become an instrument of them.”

It’s only if you read all the way to the bottom that Rucker quotes Meacham really getting to the point, which is that it’s not a failure of humankind, or constitutional checks and balances, or Congress, or even the Senate. It’s specifically a failure of the Republican Party.

“It is not hyperbolic to say that the Republican Party treats Donald Trump more like a king than a president,” Meacham said. “That was a central and consuming anxiety of the framers. It is a remarkable thing to watch the party of Lincoln and Eisenhower and Reagan and the Bushes become an instrument of Donald Trump’s. That’s a massive historical story.”

I must admit, by the way, that Rucker’s first sentence made me laugh out loud. He wrote:

The evidence of President Trump’s actions to pressure Ukraine was never in serious dispute.

Now, I happen to agree that the evidence was incontrovertible, and that those arguing otherwise should not have been taken seriously by any right-minded journalist.

But that’s not the way Rucker’s paper has described the argument in the past — and not even the way his paper was describing it in an accompanying piece in the same edition. Felicia Sonmez may be the hero of last week’s Washington Post twitter drama, but she and Rachael Bade — in their article about the smorgasbord of sometimes conflicting excuses Republican senators are making for their decision to willfully blind themselves and bend the knee – couldn’t bring themselves to say anything more definitive than:

The crux of the impeachment case against Trump is whether he used $391 million in military aid and a coveted White House meeting for Ukrainian President Volodymyr Zelensky as leverage to force the foreign leader to conduct political investigations, including one focused on Joe Biden.

There’s no “whether” here.

If the Post actually embraced Rucker’s conclusion that there is no real dispute – and I wish they would! — then every time they quote some partisan claiming that the president is being persecuted, or that the impeachment was purely political, there ought to be a sentence or two pointing out, for the record, how wrong they are.