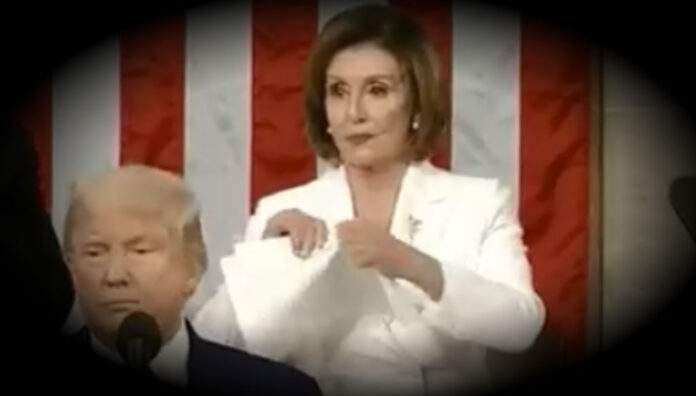 Are the niceties and deference that the news media typically confers on the president of the United States appropriate for one who lies all the time, abuses his office, defies oversight, preaches division, incites cruelty, engages in cheap theatrics, and has turned the country into an international laughingstock?

To the New York Times, the answer is: decidedly so. Its lead story on Tuesday’s State of the Union address by Michael D. Shear was an exercise in nearly pure stenography, as if there were no reason to doubt the sincerity of Trump’s words. It was a profound disservice to its readers. It’s grotesquely brain-dead opening paragraph:

President Trump claimed credit for a “great American comeback” in a speech to Congress on Tuesday night, boasting of a robust economy, contrasting his successes with the records of his predecessors and projecting optimism in the face of a monthslong Democratic effort to force him from office.

By contrast, David Nakamura of the Washington Post – and perhaps even more importantly, his editors – recognized that context was everything, and that Trump’s words actually signified very little at all. The first paragraph:

President Trump on Tuesday made a theatrical prime-time appeal for the success of his divisive and turbulent stewardship after three years, projecting confidence that a strong economy and a reset of U.S. standing in the world has put the nation on the right path despite the historic impeachment that has marred his term.

Though Trump avoided the kind of personal attacks and inflammatory rhetoric that have defined his fierce fight for political survival on impeachment, his speech was laced with inaccuracies and heightened partisanship as he offered an implicit argument that Americans have prospered and would be foolhardy to remove him from office.

Nakamura didn’t even bother with a direct quote until the fifth paragraph. Further down he made this key observation:

Though he has consistently sown and exploited divisions along lines of race, ethnicity and gender, the president peppered his remarks with nods to prosperity among minority groups and women.

And he injected some, but still insufficient, skepticism about Trump’s patently insincere promises:

In an apparent attempt to clean up a recent suggestion that he would consider cutting entitlement spending, Trump said: “I have also made an ironclad pledge to American families: We will always protect patients with preexisting conditions. And we will always protect your Medicare and your Social Security.” Trump and Republicans, however, are asking the courts to toss out the Affordable Care Act, which guarantees protections for preexisting conditions, and have not offered any replacement.

It was hardly a perfect story. Nakamura didn’t point out that the “strong economy” he mentioned in his lede was – as the Associated Press explained in a fact check — the result of an expansion that started more than a decade ago under Barack Obama. He didn’t qualify that the “reset of U.S. standing in the world,” has been a massive downgrade.

But it wasn’t stenography – or worse, admiration.

For the latter, look no further than to television journalists, who once again showed how widely entertainment values have subsumed news values in their milieu, and how susceptible that makes them to even the crassest displays of reality-TV drama.

CBS Evening News anchor Norah O’Donnell – who earlier in the day joined other top TV news personalities in debasing themselves over an off-the-record lunch with Trump, rather than taking a principled stand over his blackballing of CNN – gave it a glowing review:

This was a speech unlike any other I have witnessed from President Donald Trump – the reality TV president took on the state of the union, a master showman at his best.

We have live analysis on @CBSNews as we await the Democratic response from MI Gov. Gretchen Whitmer #SOTU pic.twitter.com/6s61MCgULb

You think they're ready for what's coming in 2020? They're not ready. This is CNN reviewing his SOTU speech.

"If elections are won by defiant showmanship alone, Donald Trump, the grand political illusionist, will waltz to a second term in November."https://t.co/u1hhtfgT68

For many reporters, the easy way out was to put Trump’s words in the context of — as the Associated Press’s Jonathan Lemire put it — “partisan discord.”

At the Los Angeles Times, Eli Stokols and Noah Bierman wrote that “the traditional address to a joint session of Congress devolved into theatrical outbursts and unmasked partisan disdain.”

In his New York Times analysis, Peter Baker lamely declared that Trump had “made the case for his presidency as only he could,” and said the event “had a surreal quality,” taking place as it was “in the same House chamber where he was impeached just seven weeks ago.”

When a president delivers a speech full of lies, that ought to be the big news. But instead, as usual, almost all of that was relegated to the fact-checks. Fact-checking this one wasn’t hard. As Glenn Kessler, Salvador Rizzo and Sarah Cahlan wrote for the Washington Post: “Many of these claims have been fact-checked repeatedly, yet the president persists in using them.”

Pretty much everyone I saw whiffed on properly covering the single most divisive moment of the night: the awarding of the Presidential Medal of Freedom to hate-radio host Rush Limbaugh (who feigned surprise.)

As the president of NARAL tweeted

Rush Limbaugh's most infamous act was calling a young grad student a slut for testifying in favor of contraceptive coverage. A terrible diagnosis does not erase a lifetime of racism, homophobia and misogyny. A sick man deserves healthcare; a bigot does not a medal of honor. #SOTU

And yet, Josh Dawsey and Philip Rucker of the Washington Post reported it straight.

That’s why, although Nancy Pelosi’s public display of contempt for Trump’s speech was actually one of the least outrageous things that happened Tuesday night, I think the media’s obsessive focus on her is kind of healthy.

Pelosi decided the whole thing was abnormal enough that she did something overtly transgressive.

So yeah, debate among yourselves: Is it time to be transgressive? I would certainly argue that it is.