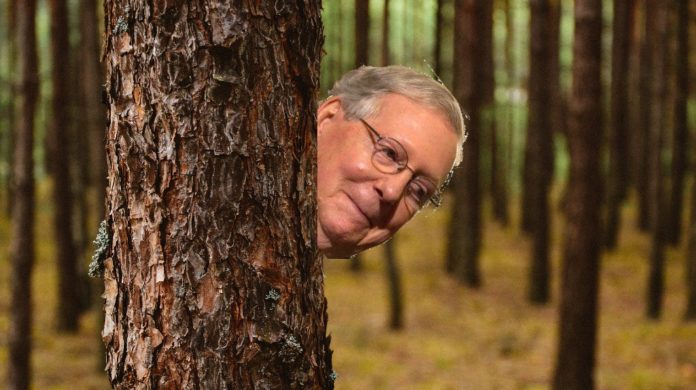 Senate minority leader Mitch McConnell has decided that the best way for Republicans to win back Congress in the 2022 midterms is to not tell voters what they stand for.

He has made no secret of his plan to make the elections a referendum on President Biden and the Democrats — and not to complicate things with anything remotely like a Republican legislative agenda.

It’s a brilliant strategy, if he can get away with it. And so far, all the signs are good. Pretty much every prognosticator inside the Beltway is predicting significant GOP advances, certainly enough to take back the House, if not the Senate.

First we have to ask: Is there a Republican agenda — and they just don’t want voters to know what it is? Or is there really no agenda at all? And where does Donald Trump fit into all of this?

Scenario 1: The Republican Party really has no agenda. It’s a post-policy party. Or maybe it’s not really a political party at all, it’s just a rage cult. Supporting that theory is the absence of any attempt to solve any actual problem for several years running now. The party’s MO has been pure obstruction. Its role: agents of chaos. It has no goal but to stay in power. If this is true, it is probably worth making that clear to the voters.

Scenario 2:  The only operative Republican agenda is whatever Trump says it is, whenever he says it, although that might change at any point. For now, the one and only agenda item is the Big Lie: refusing to accept the results of the 2020 election, making baseless accusations of fraud, purging anyone who doesn’t agree, and making sure it doesn’t happen again. If this is true, it is probably worth making that clear to the voters.

Scenario 3: Of course the Republican Party has an agenda! It is largely the same agenda it has had for decades, just a bit more extremist, considerably less keen on free trade,  and way less tethered to reality. The agenda’s goal is simple: to serve the party’s rich and corporate patrons. McConnell, the nearly-human embodiment of the party, has no principles other than raising enough money from those patrons to seize and maintain power, so keeping them happy is his top priority bar none. The problem here is that a pro-corporate, pro-billionaire agenda does not poll well with actual voters. This is the flip side of how Biden’s agenda is polling well but Biden himself is not. So the last thing Republicans want to do is advertise their agenda. Nevertheless, if this is true, it is probably worth making that clear to the voters.

All of the above?

All three of these scenarios have some truth to them.

All of them, I think it is reasonable for journalists to state with confidence, would lead to continued obstruction of any significant legislative attempt to address the existential threats facing the country. Any way you cut it, the Republican agenda is essentially a surrender to climate change, income inequality, and disparate access to healthcare.

And these agenda items probably don’t begin to encompass all the possible outcomes of a Republican takeover of the three branches. Without restraints, one can easily imagine they would embrace an even more nationalist, authoritarian, aggressively Christian and misogynistic agenda. These attempt to fill in the blanks left by Mitch McConnell are based on things we’ve already seen, or things they’ve already said.

In Scenario 1, although there is no agenda per se, one could reasonably assume that the party would put a great deal of effort into undermining pluralism in an effort to stoke and stroke White Christian grievance. For instance, by:

The political discourse would inevitably become even more degraded, political violence would become normalized; there would essentially no longer be any red line beyond which violent, inciteful and racist rhetoric is considered disqualifying from public life. Instead of legislating, the courts – increasingly dominated by right-wing extremists – would expand or rescind constitutional rights as needed.

In Scenario 2, since it seems unlikely that Trump will ever let go of the Big Lie, a top priority will likely be ensuring that Republicans remain in power even if that requires permanent minority rule. That means

Other things to expect:

Scenario 3, the “secret” agenda, can be reasonably extrapolated from historical observation. It would most assuredly involve:

The debate that’s currently raging about whether corporate media coverage of Biden is overly negative takes on even greater significance when you consider how the entire Republican strategy in the coming years will be to throw brickbats at him from behind a tree.

Biden’s shortcomings are certainly newsworthy. But paying a little more attention to who’s behind the tree, and what their intentions really are, is essential journalism.

Voting Republican, in this day and age, is not a simple protest vote. It’s a vote that carries unprecedented consequences. Political reporters should be telling voters about those consequences, and then asking if that’s what they really want.

[What did I leave out? Post your thoughts in comments or via email.]